There are a number of offences for which prosecutions cannot be brought without the leave of the Attorney General. The classic example is the offence of incitement to racial and religious hatred.

The reason for the bar is clear. Although it is possible to bring private prosecutions in most cases, few people do so. Nevertheless, some legal processes attract  axe grinders, as moths do flames. Think of this procedure as a flame guard.

The same rationale underpins the decision by this Government – in line with the intentions of the last Government – to give the DPP the final say in issuing “war crimes”  arrest warrants. Ken Clarke explains:

It is important, however, that universal jurisdiction cases should be proceeded with in this country only on the basis of solid evidence that is likely to lead to a successful prosecution – otherwise there is a risk of damaging our ability to help in conflict resolution or to pursue a coherent foreign policy.

Put simply, it would be slightly difficult to host peace talks in London, if both sides risk arrest the moment their representatives touch down at Heathrow.

Protesting the decision is the coalition of those on the far Left and Islamist far Right who have had their fun, issuing arrest warrants for various Israeli government and military figures.

Of course, a good many of their heroes, and perhaps even some of their number, might well be made the subject of vexatious Lawfare. Can you imagine what fun we might have, were we to start hounding our political opponents round the courts with imaginative and inventive charges? It would tie them up for ages, granted. But should we really be playing silly buggers with the legal system like this? I think not.

You can have a look at the inevitable “letter to the Guardian“. It contains all the usual suspects, including

There’s Caryl “Chosen People Child Killers” Churchill of course. Nice also to see Andy Newman, who ought to be grateful that visiting members of his beloved Chinese government will not be subject to arrest in connection with the Tibetan and Uyghur situation.

As a footnote to this article, three other  signers caught my eye. They are:

All three names appear on a poster for a speaker event organised at University College London – where Bindman is a visiting professor – during the “War on Terror Week”.

The event was organised during the tenure as President of the Islamic Society of the UndieBomber, Abdulmuttalab. 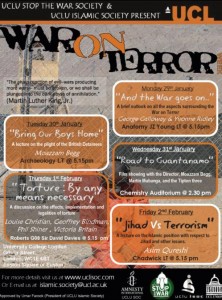