Turkey is a great NATO ally and Turkey shares our determination to fight terrorism in all its forms, whether from al-Qaeda or from the PKK.

“Despite bloody attacks against civilians and security forces, there are countries which have failed to cut the financial channels of the terrorist organization, turned a blind eye to its activities and propaganda and failed to extradite criminals”

That’s a rather neat description of what Hamas is doing at home and in Europe, and how little the UK and others are doing to stop it.

Oh, hang on, he was talking about the PKK, who should “drown in their own blood”:

But Hamas is different, don’t you know:

“Hamas are resistance fighters who are struggling to defend their land. They have won an election. I have told this to US officials… I do not accept Hamas as a terrorist organisation. I think the same today. They are defending their land.”

Here’s another line from Cameron’s speech:

Let me also be clear that the situation in Gaza has to change. Humanitarian goods and people must flow in both directions.

Got that? Israel is to open its borders to a territory controlled by Hamas, which has a long history of sending suicide bombers into the country. This is what can happen at the border:

Britain’s borders, of course, are different. Cameron’s government has made a point of banning hate preachers. Have you made nasty statements? You can’t come in. Could you be a suicide bomber? Israel should let you in.

On to another sensible line:

It should be a relationship based on a very clear message: that it is not right to have any relationship with groups that are promoting terror. Democratic states that want to be part of the developed world cannot do that.

Why Mr Cameron did, in India earlier today, referring to Pakistan. 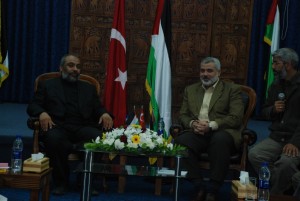 Bülent Yildirim, the president of Turkish charity IHH, which is very close to Erdogan’s government, received in Gaza by Hamas leader Ismail Haniyeh. IHH and its allies are raising funds in the UK for the next “aid” convoy for Hamas right now.