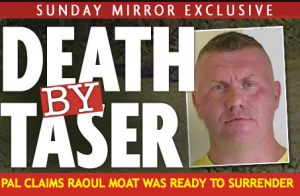 The UK media have abruptly turned tack, after following the Raoul Moat saga as entertainment for the past few days. The Guardian ran a live blog. Nice. The BBC ran countless interviews with psychologists giving pisspoor insight into the mind of Raoul Moat, and spent lots of time trying to provoke Rothbury residents to emote on the phone. Thankfully, they didn’t in general.

Now Moat is dead, attention has shifted to how the blame can be put on the Police. Let’s be clear, Moat is dead. No other member of the public was harmed. No Policeman died in the operation. This is a successful outcome, with the regrettable loss of Moat’s life. Moat, it should be remembered, was the one who had killed a man, and injured others. He was holding a gun to his own head, and continued to be a threat to others. The Police spent hours trying to defuse the situation.

At the end, the Police used tasers, before Moat took his own life. We do not know what happened. Perhaps Moat was on the verge of taking his life and the Police fired the tasers in a desperate last chance to avoid Moat’s death? We don’t know though yet, and such speculation is just that ill-informed speculation. Not that that is stopping the media from making it clear something fishy has happened. The Sunday Mirror says it was “Death by Taser“, The Guardian tells us that the focus of the Raoul Moat investigation turns on police. The Guardian article while focusing on the Police, does remind us of another area that needs looking at:

Detectives found the Dictaphone when they came across Moat’s makeshift campsite in woodland on Wednesday. It was clear from its contents that Moat had wanted it to be found, one of a series of communications with detectives that provide a disturbing insight into his state of mind in the days before he killed himself.

Evidently Moat had been reading his own press and was furious at the way the media was portraying him. Comments made by Moat’s mother, Josephine Healey, who had little contact with Moat during the past 18 years, that her son “would be better off dead” are thought to have been among the remarks that upset him.

“For every piece of inaccurate information published I will select a member of the public and kill them,” the 37-year-old bodybuilder pledged.

The media didn’t make it easy for Moat to give up, did they? Shameful.

The name of the 29 year-old man Moat killed was Chris Brown.