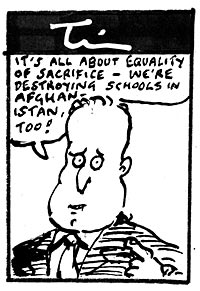 The above cartoon, by Tim Sanders for The Socialist Worker, makes one of their other cartoonists, Leon Kuhn, look like a master of rapier wit.

As was reported last month:

Sakandar Shah Mohammadi, head of Al Berooni School in Qara Bagh district of Ghazni province was beheaded on Saturday, the education ministry said in a statement.

On the same day, dozens of militants, riding on motorbikes, came to Zardalo area of the district and torched two elementary schools, Muhibullah Khepilwak, district governor, said. One of the schools was a girls’ school and the other for boys.

You see, Tim, one side in this war is deliberately destroying schools, murdering teachers and throwing acid in the faces of girls who seek an education. The other side’s motives may not be entirely altruistic, and its methods not entirely precise, but it is trying to defeat the side that is doing those things.