Golda Meir was wrong (not for the only time) when she called the late dictator Francisco Franco a “humanitarian” for his supposed role in protecting Spanish Jews during the Holocaust.

[I]n 1941, Spain prepared a list of all 6,000 Jews in its territory and gave it to the architect of the Nazis’ Final Solution, Heinrich Himmler. At the time, Spain and Germany were negotiating over Spain’s entry into the Axis alliance.

In the end, however, no alliance was signed, and Spain remained neutral throughout World War II.

After the Nazis’ defeat in 1945, the Spanish government tried to destroy all evidence of its cooperation with the Germans. But the document recently found in an archive in the city of Zaragoza, in northeastern Spain, sheds light on what Franco sought to hide.

The document is an official order, dated May 13, 1941, issued by Franco’s chief of security, Jose Maria Finat y Escriva de Romani, to all provincial governors. It instructs them to prepare a list of every Jew in their district, both local residents and foreigners, along with details about “their personal and political leanings, their means of supporting themselves, their commercial activity, the level of threat they constitute and their security classification.”

Himmler also requested that the list include Jews who had converted to Christianity. And provincial governors were asked to make special efforts to locate Sephardi Jews, descendants of those who were expelled in 1492, since they were able to conceal themselves among the local populace due to their ability to speak Ladino, a Jewish dialect that is largely based on Spanish.

“Their adaptation to our environment and their similar temperament allow them to hide their origin more easily,” the order explained. “These people do not stand out, and therefore it is especially hard to foil their efforts at subversion.”

The order refers to the Jews as “that infamous race.”

Shortly before the list was prepared, Romani and Himmler attended a bullfight in Madrid together. After it was finalized, Romani was appointed Spain’s ambassador to Germany, enabling him to deliver it personally to Himmler.

Himmler at the bullring: 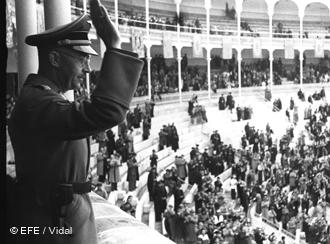 During his October 1940 visit to Madrid, the Reichsfuhrer was welcomed by the Caudillo: 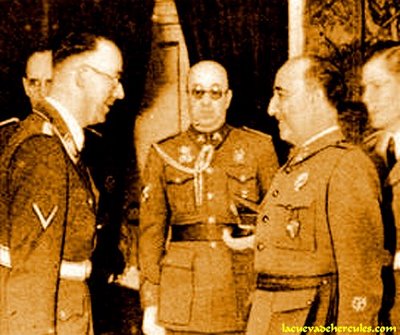 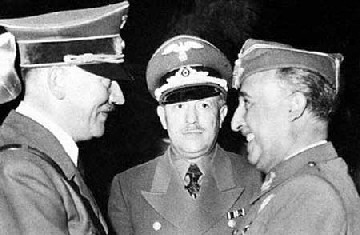 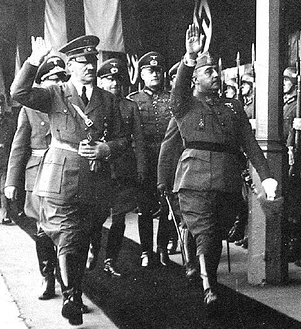 It is true that Franco built no concentration camps on Spanish territory, nor did he voluntarily hand Jews over to Germany. However, neither did he make the kind of efforts to save Jews that Spain’s neutrality would have allowed – and he did send 18,000 Spanish volunteers to fight alongside the Germans on the eastern front from 1941 to 1943.

In contrast, Spanish diplomats throughout Europe did save thousands of Jews. But they were working on their own, at great personal risk, in defiance of Franco’s official policy. These diplomats gave transit visas to Jewish refugees – most of them of Spanish descent – and also sheltered many Jews in Spanish consulates and embassies in Hungary, France, Greece, Germany, Bulgaria and Romania.

I suspect what saved Spain’s Jews was that Franco sensed which way the war was turning and chose not to be on the losing side.

In years following World War II, a number of American conservatives (including members of Congress) traveled to Madrid to pay respects to the Spanish dictator, whom they considered a bulwark against Communism. The great Washington Post cartoonist Herblock (some of whose anti-Communist cartoons I posted here) reacted appropriately in this and a number of other drawings: 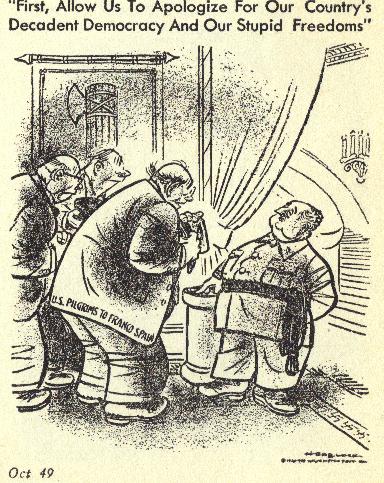 As Herblock wrote in a 1952 collection of his cartoons:

Quite a few congressmen have piled their way across the ocean to be plied by this dictator and have come back blowing champagne bubbles about him. Well, from the way they’ve paid their respects to this fellow you’d think he was Sir Galahad or something– instead of being the lame-duck member of the last previous gang of thugs who tried to take over the world.

The rewriting of history is a pastime on which the Communists have no monopoly, and some of the Reds must be turning envy-green over the job that Franco’s lobby has done for him. His press agents have been building him up as the world’s greatest champion against Communism, despite the fact that his revolution was begun against an elected non-Communist government and that he “saved” Spain from Communism only after he had first driven Spaniards into the arms of the Communists.
…..
I’ve done several cartoons about the similarity between the Communist gang and the old New Order gang of Hitler and Mussolini’s day, which putsched people like Franco into power. I think we could make a lot of hay out of that similarity– but not if we get everybody confused by snuggling up to the same kind of characters ourselves.