If neo-Nazis would march in Vienna with a poster proclaiming “Hitler wake up”, the left-liberal Viennese weekly Falter would not describe this as “strange demand”, but ask why the police allowed this slogan (a criminal offence in Austria) to be shown unhindered in public. But when it reported a demonstration organized by anti-imperialist “activists” on June 1st, they found the demand “Hitler wake up” only “strange”.

The big pro-Hamas demonstration in Vienna on June 4th was different from demonstrations in other European cities. One of its main speakers was Omar al Rawi, a Social Democratic (SPÖ) member of Vienna’s local parliament (Wiener Landtag), who is also “Integrationsbeauftragter” (officially responsible for the integration of foreigners) belonging to the Muslim religious community of Austria. Omar al Rawi, who is associated with the Muslim Brotherhood, spoke in front of about 10,000 demonstrators shouting “Israel – murderers” who waived “Israel – child killer” banners. 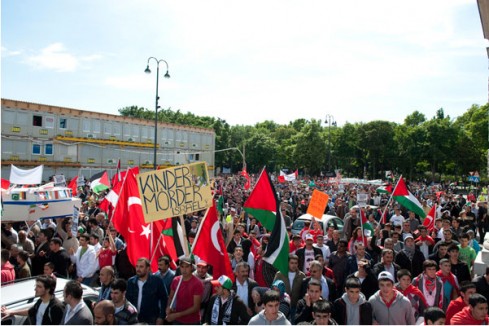 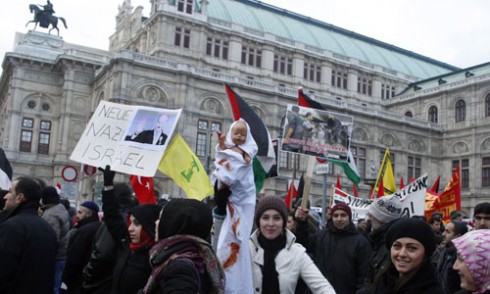 Thomas Schmidinger, an Austrian lecturer on Political Sciences at the University of Vienna and co-author of a handbook on political Islam in Austria, published in the Vienna daily Die Presse a comment “against the ‘ethicizing’ of politics”[2]. Schmidinger blamed all Austrian parties and wrote about the SPÖ and Omar al Rawi, whose “official position of contact to political Islam is of great importance. His friendly façade always crumbles when the subject matter turns to his real passion, mobilizing feelings against Israel. He has often appeared as rabble-rouser at demonstrations of Arab and Turkish Islamists professing solidarity with Hamas-governed Gaza. Last Friday, when I left the National Library, I heard from afar the voice of Al Rawi, raging and ranting against the ‘open air prison’ of Gaza in which ‘one and a half million people are incarcerated’, that the Palestinian victims ‘did not die in vain’ and that their fight must go on.[3] The angry crowd called Israel “terrorist state” and “child-Killer”. Al Rawi could proudly refer to a unanimous resolution by the Vienna Landtag condemning Israel”[4] before his audience with Turkish, Iranian and Hezbollah flags. 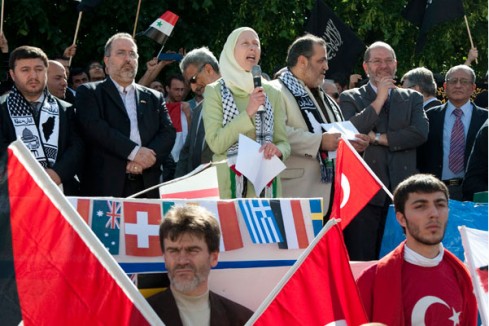 From Left to right Mehmet Turhan, Leader of the Islamic Federation (Milli Görüs associated with Moslem Brotherhood) in Vienna; Jamal Morad, Leader of Muslim Brotherhood in Austria, the Imam of the Hidaya Mosque; Carla Amina Baghajati of the Initiative Muslimische Österreicher (Muslim Austrian initiative), spokesperson of the Islamic community in Vienna; Amir Zaidan of the Islamic Institute for Teachers of Islam associated with the Muslim Brotherhood; Omar al Rawi, a Social Democratic member of the Viennese city parliament and responsible for the integration of foreigners belonging to the Islamic religious community of Austria. 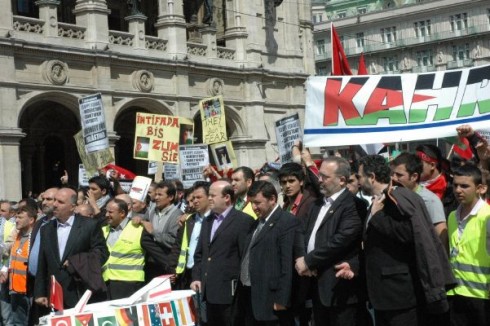 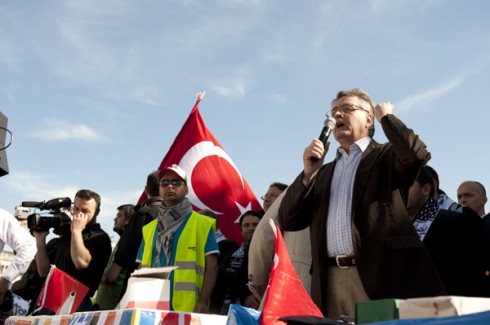 Fritz Edlinger, President of the Austro-Arab Society, a Social Democrat with a long history of anti-Semitic activity[5] 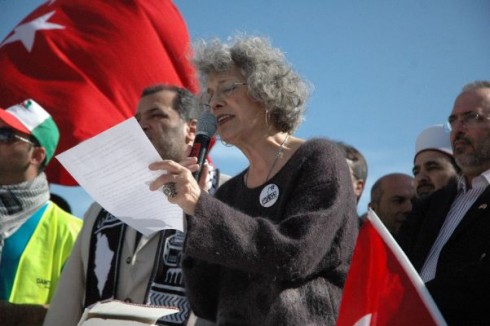 “Examples of the ways in which anti-Semitism manifests itself with regard to the State of Israel taking into account the overall context could include… :
“Drawing comparisons of contemporary Israeli policy to that of the Nazis”
http://fra.europa.eu/fraWebsite/material/pub/AS/AS-WorkingDefinition-draft.pdf

4) Marco Schreuder GREEN member of Vienna Landtatg, who was not present when the resolution was taken, dissociated himself http://www.marco-schreuder.at/2010/06/ich-distanziere-mich-vom.html