When he was in opposition, David Cameron promised action against hate preachers. In 2008, for example, he laid into Yusuf al Qaradawi, the spiritual leader of the Muslim Brotherhood, and Ibrahim Moussawi, Hezbollah’s media man.

“It’s clear for reasons of our security that we must expel or refuse entry to those who preach hate, pit one faith against another and divide our society.
…
He said of Mr al-Qaradawi. “He has been banned from the USA since 1999. He is opposed to secularism and believes that the penalty for homosexuality is death.

“And he has defended the use of terrorism in Israel and Iraq.

“Despite this, news reports say that it’s been recommended to the government that he be given permission to enter the country.

“I’ve said it before and I will say it again. People like al-Qaradawi and Moussawi are dangerous and divisive and should not be allowed in this country. Full stop.”

Full stop? Both Qaradawi and Moussawi were subsequently banned by the Labour government. Now it’s Mr Cameron’s turn in the banning seat.

Zakir Naik, the man who runs the satellite channel Peace TV, is coming to Britain in June to speak at events in Wembley Arena in London and Sheffield Arena. Here is a report from The Times:

THE home secretary, Theresa May, is facing a stiff test of the Conservative party’s claims to oppose radical Islam after her officials chose to allow a misogynist Muslim preacher into Britain.

Cameron and May now face a political test over Naik, whose inflammatory comments have led some moderate Muslims to call him a “truth-twister”.

One well-placed insider said: “Zakir Naik is a nasty man who makes al-Qaradawi look like a participant at a teddy bears’ picnic. He shouldn’t be allowed into the country to stir up hatred.”

The Home Office indicated that it was not planning to ban Naik, however.

Although Naik makes it clear he does not support specific acts of terrorism, his inflammatory speeches have included one, currently on YouTube, in which he states: “Beware of Muslims saying Osama Bin Laden is right or wrong. I reject them … we don’t know.

“But if you ask my view, if given the truth, if he is fighting the enemies of Islam, I am for him.

Yes, here he is. A longer clip is available here.

There are more shocking quotes in the Times report. Or try this rant about Jews, where Naik peddles the hateful “Jews control America” lie.

As for Peace TV, it broadcasts extremists such as Bilal Philips and Hussein Yee.

This is the line in London:

The UK Border Agency said: “Each case is considered on its own merits. When assessing a visa application, we will consider the previous conduct of the individual and we will ensure the UK does not provide a platform for the promotion of violent extremism

“We reserve the right to revoke someone’s visa if they are found to be promoting extreme views which are contrary to UK values.”.

Violent extremism? Zakir Naik has just been on a speaking tour in the Maldives. During a Q&A session, a Maldivian man asked this:

“Dr Zakir Naik. I am a Maldivian. I am still struggling to believe in religion. That is why I just came to the front of this row. I was born a Maldivian. My parents taught me the religion of Islam. They are good practitioners, actually. I read a lot of books. I have read the translation of Quran. Yet, I still do not believe in a religion. So what do you say, [about] my verdict in Islam? Because Maldives is definitely a Muslim state,” Nazim asked.

Mohamed Nazim, 37, said although he was born to a practicing Muslim family and his parents taught him Islam, he was “struggling to believe in religions,” and asked Naik about his “verdict in Islam.” 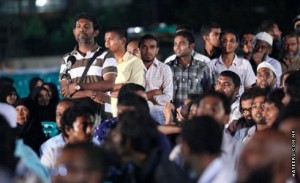 The answer? Turn yourself in to the government.

Naik said Nazim should ask the government about his status, as he was claiming that he was a non-Muslim, despite the government telling Naik that Maldives is a 100 percent Muslims country. When Naik asked Nazim “are you a Muslim?” he replied “I am not.”

Mohamed Nazim added another question. Naik’s answer was to call for the death penalty for former Muslims propagating any other faith than Islam and “speaking against Islam”:

When Nazim asked “Does the [penalty] of apostasy come on me?” and “Do you think I was a Muslim because I was born to Muslim parents?” Naik said that according to Prophetic traditions, every child is born as a Muslim and that a Muslim is one who submits his/her will to God. In Islam, death penalty should not necessarily be evoked on every person who leaves Islam, but to those who propagate the non-Islamic faith and speak against Islam, he added.

Nazim’s question sparked comments of hatred from an angry crowd of around 11,000 with many calling to kill him and attack him, while Naik was answering the question.

Several people rushed towards Nazim, who was sitting at a back row after moving away from the microphone, as an official of the Islamic Ministry tried to escort him out. Police, however, came between Nazim and the crowd and escorted him into custody.
…
A Police media official said Nazim received several minor injuries. He is in custody at an undisclosed location, the official added Saturday afternoon.

When Police took Nazim to the second block of nearby police building Iskandharu Koshi, the crowd gathered outside the place and demanded his handover. They shouted anti-atheism slogans and called for Nazim’s beheading.

The constitution stipulates Maldives citizens must be Muslims.

Two men were arrested for assaulting police officers trying to protect Nazim. They have since been released. Unfortunate Mr Nazim is instead in custody and will receive “religious counselling”.

Zakir Naik has said he was “shocked” about the developments. By a man declaring his atheism, that is, not the mob assault on Nazim and the plight he finds himself in now: