A standard canard of the anti-Zionist far Left is that the Holocaust was in some sense a joint venture between the Nazis and the Zionists. The idea, you see, is that Zionists are so morally corrupt that – unlike all other national liberation movements – they will treat with the Nazis, whose ideological bedfellows they are. Indeed, so some will argue, Zionism is at best neutral to antisemitism, and at worst, relishes or even encourages it. That is its essence. There is no sense that Zionism is a response to racism. How could it be – for racism only happens to the powerless, and as we know, there is no creature as potent as a Zionist!

I don’t propose to rehash the debate around Jim Allen’s play, Perdition, further. Rather, let me share with you the following photographs. 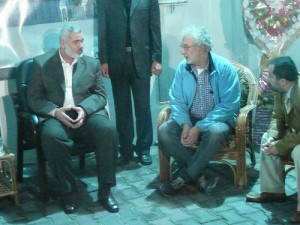 Here is Ismail Haniyeh making nice with Mike Cushman, a Research Fellow at the London School of Economics. 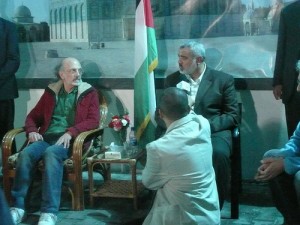 Here is BRICUP’s Jonathan Rosenhead, Professor Emeritus at the London School of Economics.

What a shabby pair these two dons make! Haniyeh has at least made the effort, and put on a suit. Cushman, by contrast, is decked out in a pair of grubby jeans and a pair of equally grubby trainers, the soles of which he is displaying, simultaneously to his two hosts, who look suitably unimpressed by such loutish ill manners.

When the history of the British anti-Zionist movement is written, it will tell the true story of how its activists allied themselves with the leader of a genocidal racist movement, whose party’s foundational Covenant promises that prior to the Day of Judgement Muslims must murder the Jews, and which goes on to justify its politics by reference to the thesis of the Protocols of the Elders of Zion.