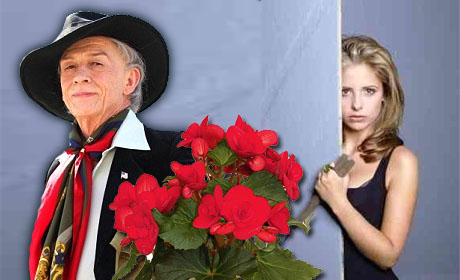 Yesterday Alan A covered the story of Philippa Stroud, the Tory candidate who it is alleged in The Observer runs a church that tries to drive demons out of gay people.

But now Pink News is reporting that lawyers letters have been dispatched by Mrs Stroud’s solicitors and that she denies she is homophobic.

PinkNews.co.uk has been told by solicitors representing Philippa Stroud that a number of media organisations have been contacted warning them of their duties not to publish “false” allegations about a parliamentary candidate in the run-up to tomorrow’s general election.

Mrs Stroud, the Conservative candidate for Sutton and Cheam, was accused in The Observer of having founded two churches that helped people who believed their homosexuality was caused by demonic possession and that it could be overcome through prayer.

The newspaper quoted testimony from a number of people who had claimed they had been helped by the churches and one person who worked for one of the churches.

On Sunday, PinkNews.co.uk contacted Mrs Stroud to ascertain if she rejected the claims.

In a a statement she said: “I make no apology for being a committed Christian. However it is categorically untrue that I believe homosexuality to be an illness and I am deeply offended that The Observer has suggested otherwise.”

When PinkNews.co.uk pointed out to her spokesman that The Observer’s prime claim was not that she believed homosexuality to be an illness and that instead, it was that she appeared to believe it could be overcome through prayer and removing “demons”, a spokesman said: “We will not be adding to or subtracting to [sic] the statement.”

Pink News also report that David Cameron is standing behind her.

Conservative Party leader David Cameron has given his support to a Tory candidate accused of trying to “cure” gay people.

Philippa Stroud, the Conservative candidate likely to win the Sutton and Cheam seat at this week’s general election, founded a church that purported to “cure” gay and trans people through exorcising their “demons” through prayer, it was claimed this weekend.

Mrs Stroud said in a statement that she does not believe homosexuality is an illness, although she refused to comment on whether she believed homosexuality could be cured through prayer.

He said: “She believes in gay equality.”

Meanwhile, Stroud’s solicitor “would not comment on whether she believed, as was claimed in The Observer, that homosexuality is caused by demonic possession, or that an organisation that she ran believed this doctrine,” according to Pink News.

I wonder why not. Perhaps her lawyer is canny enough to realise that – quite apart from her views on gay people – it’s more scary that she might actually believe in demons. After all, she did once write a book, God’s Heart for the Poor, in which, The Observer notes, she explains how to deal with people showing signs of “demonic activity”.