On Saturday Gene reported Sameh Habeeb’s usage of the antisemitic “media control” line in an interview with Leeds Student, the university newspaper.

The interviewer did herself little credit by leading him on with her “hidden agenda” question. 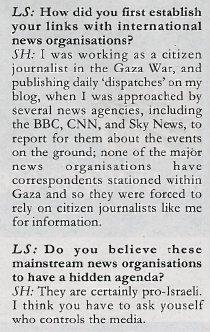 Discord has ensued and it is spinning out of control. The student union has decided to stop distribution of the edition of the paper with the interview. A group incensed by the decision has formed:

LUU stopped Leeds Student from being picked up by its readers. LUU decided to requisition all the issues on the basis of a quote they didn’t like. They have no legal basis for complaint – without quotes stories are nothing. They are eroding free speech. The editor of LS deserves a full apology from LUU for its unprofessional behaviour. Issue 17 should also be fully re-instated – not a censored version

Here’s why, written by C Cooper:

Issue 17 of the newspaper was removed by order of members of the Exec, because they took offence to an item in an interview, an item which in my view was completely inoffensive, and in any case entitled to be made under free speech laws. Nor does an individual have the right not to be offended.

The interview was… with a student journalist who has reported from the Gaza Strip. Naturally we’d love for you to be able to read the interview itself and make your own judgement, as is every reader’s right, but some on LUU Exec decided you shouldn’t have that right.

So we’re all rather cross considering the people want to read their paper, advertisers work with us on the basis that people get to read the paper, and we work very hard for no reward other than people reading the paper. Newspaper back on the shelves on Tuesday, though the items in question may be censored out, which we think is a travesty, since it deprives readers the right to make up their own minds about them.

Here’s the other side:

Leeds student published an interview with the editor the Palestine Telegraph, Sameh Habeeb. Leeds Student asked the editor whether the mainstream news organisations have a hidden agenda. This question in itself, highly dubious and libelous obviously necessitating a repugnant response it wants to hear. That response being, “I know they are pro-Israeli. I think you have to ask yourself who controls the media.” This is classic anti-semitism to assert that the Jews have some sort of hold and control over the media. These two links explain how these sort of accusations are inherently anti-semitic:

This link refutes these vile notions that the Jews run everything and explains how such notions are classical cases of ancient old anti-semitism.

Leeds students as a society within LUU has a duty to publish responsibly. This sort of article has severe ramifications for the welfare of jewish students and this sort of behaviour falls under the remit of equality and diversity

If you agree that the behaviour of Leeds Students is outrageous please write an email to:

Once again a chance to have a discussion about extremism has been lost to bitter disputes about free speech. How lucky for Mr Habeeb. That’s one reason I disagree with the decision to spike the article.

You can read the whole interview here (pdf) if you like.

It’s simple. Mr Habeeb is a far right hate publisher. In recent months he has:

– published a video of an antisemitic speech by David Duke, a former “grand wizard” of the Ku Klux Klan, and the work of a number of other American sickos at the Palestine Telegraph. One might hope that Laura Mackenzie, the author of the Leeds Student interview piece, would be interested to learn that, given that she seems to have a taste for sneering at America.

– threatened Nothing British About the BNP with legal action for criticising the Palestinian Return Centre (PRC), a Hamas front in London, when the PRC invited Hungarian neo-fascist Krisztina Morvai of the Jobbik party to a London conference. Habeeb works for the PRC.

– published several pieces by Gilad Atzmon, including a revolting insult to Holocaust Memorial Day. Atzmon hails the “prophetic qualities” of “The Protocols of the Elders of Zion”, the notorius antisemitic hoax, and reminds people that, hey, after all, Jews declared war on Germany first.

– published the absurd organ thievery blood libel against Israelis helping out after the earthquake in Haiti. This led to the downfall of Jenny Tonge, then a patron of the Palestine Telegraph. She stood by the paper, though, until it published the Duke video. Then she resigned, to be replaced as a patron by George Galloway.

– in this case, yet another sickening article and cartoon:

Do you believe these mainstream news organisations to have a hidden agenda? Sameh’s response was “They are certainly pro-Israeli. I think you have to ask yourself who controls the media.” I know myself that many people around the world certainly do ask this same question so how come Gene tried to make this story into something sensational?

The bulk of the media certainly is controlled and does carry an allegiance to Israel. It has been pointed out historically for many many years that the media is now a monopoly and one leader figure is of course none other than Rupert Murdoch.

I note that many times there appears to be a cover up as to if Rupert is of a Jewish family. His father married an extremely wealthy Jewish girl which basically launched Rupert on his very successful career. No matter what Harry’s place tries to say according to the law of the Talmud that certainly makes him Jewish. 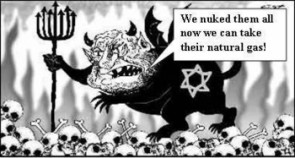 Have a look at the kind of websites that peddle the “Murdoch is a Jew” line.

I do think freedom of speech codes and student union rules at universities need critical attention. If a BNP speaker would most certainly not be welcomed on campus, there is also a case for banning Mr Habeeb and several other extremists who are hosted by left wing groups and Islamic student societies. The same goes for uncritical interviews in student newspapers. Fairness is important.

The truth is more important still. All of us will have our views on what can and cannot be said, and when and where. A big happy consensus on detailed rules and how to implement them is most unlikely.

Never mind. What I do hope many people will agree on is this: Mr Habeeb is in the business of spreading poisonous racist hatred and anti-fascists should call him on it, on any platform or none.