This is a guest post by a Marmite loving anti-fascist

I was a little taken aback on finding that the beloved marmite pot (I’m a lover, not a hater) appears on the top left hand corner throughout Nick Griffin’s speech in the election broadcast. 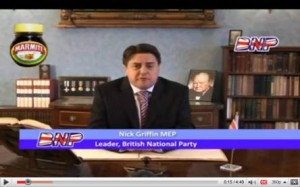 Terrifying thoughts sprung to mind. Had Marmite (and Unilever, who own Marmite) sponsored the BNP? Or maybe, perhaps more terrifyingly still, the BNP were trying to be witty: “The British National Party – you either love us or you hate us”. Or had Griffin merely not learnt from past mistakes – using Winston Churchill, old army veterans, and young soldiers in Afghanistan – to promote the BNP. Had he now chosen another ‘British-great’, and wrongfully misused and adopted Marmite in his election campaign?

Thankfully, and a short phone call to Unilever later, it appears that it was the latter. Unilever have since released the following statement:

It has been brought to our attention that the British National Party has included a Marmite jar in a political broadcast shown currently online.

We want to make it absolutely clear that Marmite did not give the BNP permission to use a pack shot of our product in their broadcast. Neither Marmite nor any other Unilever brand are aligned to any political party.

We are currently initiating injunction proceedings against the BNP to remove the Marmite jar from the online broadcast and prevent them from using it in future.

So again, it appears that the BNP have been dishonest. They haven’t learnt from their previous experiences and, yet again, they haven’t gained permission from those that they choose to use in their political campaigning.

I knew I could rely on Marmite, my true love. In these actions, Anglo-Dutch multinational Unilever has proved that it is more British than the BNP.