Yet there have been growing calls from national haredim to reinstate the Korban Pesach upon the Temple Mount itself. The push for this is being led by the Sanhedrin Initiative and the Temple Mount Faithful, who are seeking to establish haredi law in Israel in the shape of a new Sanhedrin, based around the re-building of a third Temple.

This year, many leading Litvak rabbis in Israel including R. Chaim Kanievsky have supported these efforts to bring back the Korban Pesach, promoting a document called Tzipisa L’yeshuah (‘looking out for salvation’).

A new effort to prepare Yidden for the coming of Moshiach in time for Pesach 5770 has received the approval from gedolim. The project is aimed at having Yidden organized in chaburos, with animals inspected and ready to be used for the korban Pesachupon Moshiach’s arrival prior to the Chag Hamatzos this year.

“We have to live with the reality of the geulah,” said an organizer. “We have to believe and act as if it is imminent. Preparing properly for the korban Pesach ahead of the upcoming chag is a part of this effort.”

Whilst these events have caused much excitement in some circles, many were left disappointed by a recent Israeli legal ruling. This past week the Israeli supreme court rejected a petition for the Korban Pesach upon the Temple Mount, fearing such an event may cause political tensions and potentially lead to violence (supporters of the initiative would claim they would carry out the sacrifice peacefully, and any violence would not be of their doing).

Naturally, this comes as a huge disappointment to those attempting to revive the Sanhedrin. Set up in 2004 and endorsed by leading Israeli rabbis Ovadia Yosef and Mordechai Eliyahu, the re-constituted Sanhedrin is itself a fascinating development, and it has made sensational headlines.

In 2004, Kahanist rabbi Yosef Dayan joined the Sanhedrin, and soon made headlines for performing a pulsa denura (kabbalistic death curse) upon Ariel Sharon. In July 2005, members of the Sanhedrin claimed that Rabbi Dayan was most probably a descendant of King David, and said he should be the next king over Israel once the monarchy was re-established.

The Sanhedrin also support the archaeology adventures of Vendyl Jones, who is on the hunt for the Ark of the Covenant and believes he is the real-life inspiration for Indiana Jones. The Sanhedrin actively seek out Gentiles to become “Noahides” – Gentiles under their authority who observe the Seven Laws of Noah.

In January 2010, the Sanhedrin hosted Italian Muslim leader Sheikh Palazzi, who has recently argued on TabletMag that “Allah is a Zionist”. Back in 2006 Palazzi remarked how impressed he is with the new Sanhedrin, endorsing their Noahide outreach programme. Recently, the Sanhedrin have allied themselves with Turkish author Adnan Oktar (Yahya), whom since meeting the Sanhedrin has moved from promoting conspiracy theories about Jews and Freemasons to publicly opposing anti-Semitism.

But if you’re reading this on a cloudy day in Hull or Bootle, and think what relevance does the Sanhedrin have for me?, well think again. If you’re British, you too should follow the rulings of the Sanhedrin.

This is Sanhedrin rabbi Michael Bar-Ron: 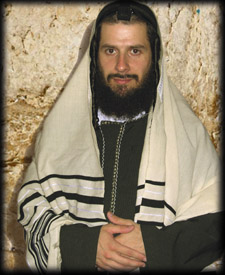 As I specifically told Dr.[Vendyl] Jones, I do believe there is a historical base for Anglo-Saxons to claim mixed Israelite descent, a source of inspiration to many to return to the Hebrew nation, and the Jewish People…Like Mr. Davidy, (albeit in your own unique style, and your own strong sense of purpose and destiny) continue to do what you’re doing, raising awareness of mixed Israelite ancestry of Northern Europe. It’s powerful stuff.