The Sunday Times has a blockbuster article that looks at the twists and turns of the Human Rights Watch saga.

Marc Garlasco, as you will all remember, turned out to be a collector of Nazi-era military memorabilia, who hung around chatrooms saying things like:

“That is so cool! The leather SS jacket makes my blood go cold it is so COOL!”

He has now resigned from HRW:

On March 5, Garlasco’s name was removed from the list of staff members on HRW’s website. Later that day, the Jerusalem Post newspaper asked about Garlasco’s status. A spokeswoman replied by email that HRW had “regretfully accepted Marc Garlasco’s resignation” two weeks before. Kenneth Roth has sent an email to staff, board members and some key donors insisting that they do not respond to any media inquiries about the matter. Garlasco, meanwhile, prefers to stay out of the limelight: when The Sunday Times Magazine inquired about using the picture of Garlasco wearing a sweatshirt featuring an Iron Cross, we received this reply:

“It is my understanding that you intend on using a photo or likeness of him, which is copyrighted, without his permission. Should you do so… we will prosecute this matter to the fullest extent of the law. Sincerely, Attorney Paul James Garlasco.”

We contacted Attorney Garlasco to find out if he was related to Marc Garlasco; he did not return our calls or emails. 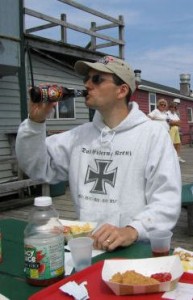 However, it is a little snippet at the end of the story that we’d like to highlight now. It concerns another Human Rights Watch employee, Scott Long:

Many of those on the left of the human-rights “community” may feel conflicting emotions when it comes to dealing with radical Islam, as if the former is somehow a dangerous distraction from the real struggle. In 2006 Scott Long, the director of the lesbian, gay, bisexual and transgender rights programme at Human Rights Watch, attacked the British campaigner Peter Tatchell, accusing him of racism, Islamophobia and colonialism for having the temerity to lead a campaign against Iran’s executions of homosexuals — a campaign that Long believed was unconstructive and based on “a Western social-constructionist trope”.

There is an awful lot to say about the conduct of Scott Long over the years.

UPDATE
It appears that Tom Porteous of Human Rights Watch will speak at an event with Moazzam Begg of Cageprisoners this Tuesday: