In the video of an event at the UAF/EDL confrontation in Bolton discussed below, it seems that someone wearing jeans and a bright red helmet was in an awfully big hurry to get to the front of the action… somebody carrying shoulder bags – like a photographer.

It certainly seems consistent with the following scenario: a photographer covering the event was very anxious to run past the police making an arrest – carrying a protest off – in order to photograph that arrest. In his haste, he knocked over an OAP.

That’s what the video seems to show.

Now, there is one photographer who is well known both for covering events like this AND for sporting a bright red helmet: SWP/Indymedia photographer, Guy Smallman. 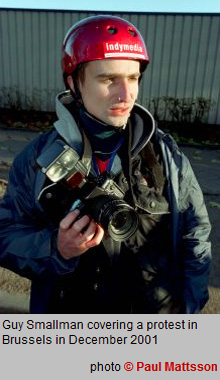 Of course, this is merely circumstantial, so if Guy Smallman is adamant it isn’t him in the video, we’ll completely accept his word. But perhaps he could review the video and confirm if our suspicions are correct or not.

Where you in Bolton, Guy? Is that you in the video?

No it wasn’t me. The red helmet (seen in the picture above) and also on the ‘United Casuals’ blog (photo lifted from an ancient London Freelance Branch news item) was chucked away years ago. For the record I now have a black ‘Tony Hawk’ helmet for both cycling and public order situations which is far lighter and more comfortable than it’s predecessor.

I was in Bolton but managed to miss most of the action as the Police had turned much of the town centre into a poor imitation of Baghdads green zone with their metal barriers which made media access tricky to say the least.