So, it has finally happened.

The English Defence League is a group of football hooligans, which is to some extent multi-ethnic, and which declares itself anti-racist, but opposed to “Militant Islam”. Precisely what “Militant Islam” means in this case is not clear, and I do not believe that most EDL members have a particularly sophisticated or well informed view on the subject.I have seen videos produced by the EDL, and they have something of a ‘Jihad Watch’ approach to Islam. Muslims are right to resent and fear their activities.

Although BNP members have been banned by their party from participating in the EDL – apparently on the grounds that it is a Jew trick – there is a limited overlap of membership between the two organisations. I should add that the EDL claim to have beaten up the man who was famously pictured giving a ‘Roman salute’ at one of their rallies. 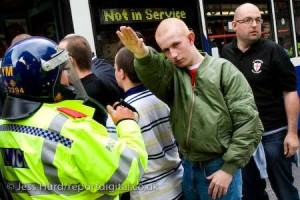 When the EDL hold public rallies, violence occurs. It occurs because the EDL are yobbos, and enjoy a public scrap. They are therefore particularly fortunate in their choice of adversary: Unite Against Fascism.

Unite Against Fascism is a broad based campaign which is supported by trade unions and ‘civil society’ at large. It has the support of a wide range of worthies, including David Cameron and the Bulgarian-Scouse electropop ensemble, Ladytron.

Unfortunately, its leadership is in the possession of two of the most obnoxious political parties in Britain: the Socialist Workers Party and Socialist Action. The Socialist Workers’ Party’s commitment to anti-fascism can be judged by its touring around of the ‘ex-Jew’, Gilad Atzmon: a man who claims that the Protocols of the Elders of Zion accurately portray the reality of what he terms, elsewhere, “Jewish Power”. Socialist Action are a function of Ken Livingstone, and have enthusiastically pursued a policy of allying with groups that are aligned with the Muslim Brotherhood and Jamaat-e-Islami. These two parties run Unite Against Fascism as their personal possession, and for the purposes of recruiting cadres and providing a level of public exposure to their leading figures.

Bennett is an unimpressive figure. A measure of the man is his response, upon arrest:

Officers came up to me as soon as I arrived and said they would arrest me. They are hostile to anti-racists and there needs to be an investigation. “Police neutrality needs to be questioned.

Unite Against Fascism advertised this event as a confrontation between their supporters and the EDL. The slogan, “No Passaran” does not inevitably mean a physical confrontation, but its association with military struggle, and in particular the Siege of Madrid, does tend to promise a bit of a ruck. 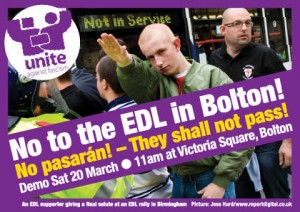 The EDL should be confronted. It is right to show solidarity with British Muslims against these hoodlums. However, the one thing Bolton could have done without was a riot. Unite Against Fascism could have staged a dignified and empathetic act of solidarity that might have united the community, and show the English Defence League in their true colours. Instead – because the far Left is in love with “street politics” –  they got this: 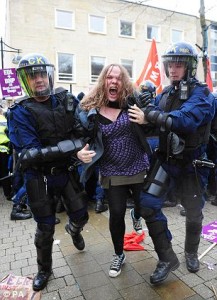 Yesterday afternoon, the EDL and UAF were no more than two rival football firms, meeting up after the match for a little pre-planned aggro. Dismal.

As a result, Weyman Bennett not only gets the chance to play the martyr, but runs the real risk that he will be imprisoned. I feel sorry for him, and hope that – if the Crown Prosecution Service proceeds against him – it is on the basis of very strong evidence that he was actively involved in concrete and detailed plans to commit violent disorder: and not merely on the grounds that he was a little bit mouthy. Let’s see what the story is.

However, doesn’t this incident just show how unfit Unite Against Fascism is to lead an anti-fascist struggle?

I don’t have much time for WB’s politics and am very critical of the SWP’s ‘leadership’ of the anti-fascist movement. However, WB and the others arrested on Saturday deserve our support. Your characterisation of what happened in Bolton on Saturday is way off the mark.

The police ‘kettled’ two large groups of anti-racists, one in the main square and another a short distance away. They then proceeded to provoke the crowd, dragging people out, storming in with riot gear and dogs – all for no apparent reason. Whilst this was going on, violent EDL racists roamed around Bolton with impunity.

One result of this was that the fifty or so of us who’d avoided being ‘kettled’ came under attack from an organised group of EDLers. Just to be clear: EDL supporters, some of them wearing balaclavas, charged towards us, threatening violence. Our response? We returned their charge and chased them off.

What would have happened if we hadn’t responded in kind? We’d have got a kicking from these violent scum.

The problems on Saturday stemmed not from anti-racists – who were, in the vast majority of cases, peacefully protesting against the EDL – but from the violent actions of both the police and EDL.

It was a truly disgraceful spectacle.