Now here is a good match. At the end of the month Friends of al Aqsa, a group entirely dedicated to campaigning against Israel, will hold a pre-election event with Liberal Democrats in Leicester. Who will represent the party? Prospective parliamentary candidate for Leicester South and local councillor Parmjit Singh Gill and, ahem, Jenny Tonge.

Friends of al Aqsa is headed by Ismail Patel. He is also the director of YouElect, a new group set up to encourage Muslims to vote at the general election and provide information on candidates. It is being promoted by the Muslim Council of Britain (MCB). You will also find Patel on the steering committee of the “Stop the War Coalition”.

Here he is at the January 10 2009 Gaza demonstration in London, which ended in violence. He saluted Hamas and told off bad Jews for supporting “genocide”.

“Hamas is no terrorist organisation. The reason they hate Hamas is because they refuse to be subjugated, occupied by the Israeli state, and we salute Hamas for standing up to Israel.”
…
“…to the state of Israel: you no longer represent the Jewish people. You have no moral authority to speak for the Jewish people when thousands of Jews are against what you are doing. And finally, to the British Jewish Board of Deputies, shame on you, to work, to promote the genocide of the Palestinian people and the war crimes of the Israeli government. You do not speak for the British Jewry who today have signed in the Guardian against the Jewish government, what it is doing to the Palestinian people. Shame on the British Jewish Board of Deputies.”

This article excerpt, posted today, is the kind of material you will find on Patel’s Friends of al Aqsa website:

In his diary, Theodore Herzl, the father of modern Zionism, wrote that not always and not everywhere should Jews oppose anti-Semitism, because anti-Semites are an invaluable card that can be used against anyone, Jew or non-Jew, who dares to speak out against Israel and Zionism.

“It is essential that the suffering of Jews become worse. This will assist in the realization of our plans. I have an excellent idea. I shall induce anti-Semites to liquidate Jewish wealth, the anti-Semites will assist us thereby in that they will strengthen the persecution and oppression of Jews, the anti-Semites shall be our best friends…So anti-Semitism, which is deeply imbedded force in the subconscious mind of the masses, will not harm Jews.

I actually find it to be advantageous to building the Jewish character, education by the masses that will lead to assimilation. This education can only happen through suffering, and the Jews will adapt.” (from his diary, part I, PP. 16)

David Ben Gurion, the first prime minister of Israel, was convinced that Zionism could only thrive on anti-Semitism, and that in order to strengthen Zionism, anti-Semitism would have to be encouraged.

Just what is Friends of al Aqsa recommending people read? The excerpt is taken from an article on IslamOnline, a website headed by Muslim Brotherhood spiritual leader Yusuf al Qaradawi. IslamOnline chose this lovely image for the article:

Let’s see what else the writer has to say:

Today, one of the least-known secrets about Israel’s exploitation of anti-Semitism is the fact that Israeli agents, as well as Zionist activists around the world, are often instructed to carry out “anti-Semitic” incidents in order to serve Israeli interests.

Normally, such activities witness a phenomenal rise whenever Israel’s image is suffering, especially in the aftermath of war crimes or crimes against humanity committed by Israel against the Palestinian people, or other peoples of the Middle East.

This might sound strange in light of the often-vitriolic reactions by Israel and Zionist circles, such as the Simon Wiesenthal Center, who oppose ostensibly anti-Jewish acts, such as vandalizing Jewish grave markers, spray-panting swastika signs at Jewish-own property, or shouting “kill Jews.”

Sometimes, hand-grenades are hurled at Jewish targets, such as synagogues, and Jewish cultural centers are torched, all in order to foster an atmosphere of fear among Jews, which Israel could utilize in order to expedite Zionist goals, including forcing Jews to immigrate to Israel on the account that they would not be able to find peace and security elsewhere.
…
In interviews with some of Israel’s Palestinian collaborators, I found out that the Shin Beth, Israel’s chief domestic security agency, often instructed some collaborators to lead demonstrations and shout extremist slogans against Jews, not Israelis, such as “kill the Jews,” “slaughter the Jews,” and “Jews to the gas chambers.”

Of course, Israeli TV cameramen would be impatiently awaiting to film the priceless propaganda sketches, highlighting the anti-Semitic sound bites. And within a few hours, the fabricated scenes would find their way to TV screens around the world, and MEMRI, HonestReporting and other Zionist propaganda mouthpieces would enjoy releasing another “scoop” showing “the type of people Israel is dealing with in the Middle East.
…
Inducing Judeophobia at the hands of Zionist agents is by no means confined to occupied Palestine, where often-monstrous Israeli crimes are more than enough to make Palestinians hate everything Zionist and Israeli. In Europe and North America, Zionist agents have been fabricated numerous “anti-Semitic” incidents in recent years, some of which have been exposed but only after generating a huge outcry in the media and society.
…
It is important to confront the world with these facts, especially now as Israeli propaganda’s leaders are having the audacity of calling for swapping Palestinian refugees with Jewish refugees from the Arab world. They are scandalously ignoring the huge differences between the two cases, namely the fact that in the first case, Palestinians were massacred into leaving their homeland while in the other cases, Jews were terrorized or induced, also by Zionism, to leave for Israel in order to bring about Zionist fulfillment.

Today, Israeli agents keep up the same hateful traditions of encouraging anti-Semitism in countries, such as France in order to generate a feeling of fear and insecurity among French Jewry, hoping that this would prompt them to immigrate to Israel to live on a land that belongs to another people.

I am quite sure that Israeli and Zionist strategists pray for a miracle, perhaps in the form of a bombing campaign against French Jewish targets, which would trigger an exodus of Jewish immigrants from France to Occupied Palestine.

Nevertheless, Zionist would want to do it “safely” and “without getting exposed,” probably by secretly hiring some naïve and unemployed French citizens of North African descent to do the job.

This is why, it is imperative that all ostensibly anti-Jewish incidents be monitored meticulously in order to ascertain whether Zionist hands are behind them.

A final note: There is no doubt that Israel’s genocidal crimes against Palestinians, such as last year’s Nazi-like onslaught on the defenseless people of the Gaza Strip, remain by far the biggest generator of anti-Semitism around the world.

This is a clarion proof showing the utter mendacity of the claim that Zionism constitutes the final solution for the “Jewish problem” or “anti-Semitism”. It also shows that eradicating Zionism, the poisoned ideology of Jewish supremacy, is a sine-qua-non for eradicating anti-Semitism, since the two are more or less two sides of the same coin.

Got that? Antisemitism exists, but mind the Nazi Jewish plots behind many of its most vicious expressions, including physical attacks. Oh, and Zionism must be “eradicated”.

The author of the article is Khalid Amayreh, a Palestinian journalist who specialises in demonisation of Jews. Ismail Patel is very keen on his work. So, by the way, is Middle East Monitor, the web operation of Daud Abdullah, deputy secretary general of the MCB.

Here’s another “Jews are Nazis” piece by Amayreh on IslamOnline – “Holocaust: Israel’s Red Herring”. It shows just how low he and IslamOnline go in their putrid Jew hatred:

Their actions were evil, because they were simply evil, and even if six million non-Jews had been killed instead of the six million Jews we are told were killed, the nefariousness of the Nazi crimes would not have been any lesser.

This means that anyone or any people behaving in Nazi-like manner should be compared to the Nazis. In the final analysis, when Jews think, behave, and act like Nazis, as demonstrated in Gaza last year, they should not be spared the Nazi epithet no matter how long and how hard the Netanyahus, Wiesels, Liebermans, and Pipes of the world keep barking.

That IslamOnline article is illustrated with these images: 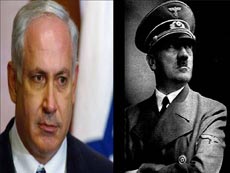 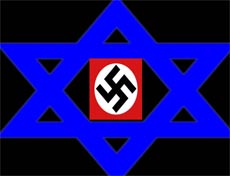 Have a look at Mr Amayreh’s website for more evidence of his extreme views. He has written a whole book on the Nazi Jews theme. He also has a taste for cartoonist Latuff and Holocaust denier Gilad Atzmon. 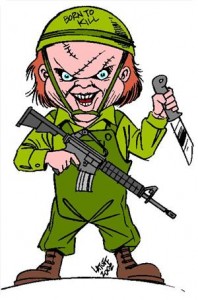 This is the swamp of racist hatred Ismail Patel wallows in. He and Jenny Tonge are perfect partners.