Since 2006 a group has assembled at Belmarsh prison during the month of Ramadan for an iftar meal, breaking the fast and demonstrating solidarity with Muslims behind the prison walls. Not all of them, mind you. This event is for men inside on terrorism charges or held under control orders.

It is a radical group, bringing together people like hate preachers Murtaza Khan and Shakeel Begg, Tehran lackey Yvonne Ridley, and Moazzam Begg of Cageprisoners.

The event’s main organiser is the Muslim Prisoner Support Group, the charity with two terrorists among its former trustees. One of them, al Qaeda operative Mohammed Al Ghabra, has been among the speakers.

This is a message from a member of another organiser, the Woolwich Dawah Network. It will give you a sense of the mentality at work here. He sees the IRA as a model and British mosques as insufferably weak in the face of the enemy – the police:

We are so scared of putting ourselves forward for fear that we might be next that we have left our brothers and sisters to the whims of others. In Ireland if they wanted to make arrests they would have to with the army and full riot gear for fear of what the community would do. For the Muslims they can send a couple of voluntary police and that will suffice as they know the Muslims will pull their curtains and not help. Our mosques refuse to address any of these issues. Our leaders look the other way. It is our silence that is killing us.

Where do I start?
…
Do I talk about the beautiful recitation of Abu Hamza’s son who moved the people so much that down the road where Muslims were working in a pizza shop they came all the way to find out why Quran was being recited outside a prison and then asked how they could help?
…
Do I talk about the people who would come up to be one after the other filling my hands with money? Do I mention the brother who shook my hand leaving hundreds there?

Do I mention the talk by Mozzam Begg who had being driving for over 3 hours just to come talk to us for 15 minutes? Do I mention that he spoke while the people ate?

Do I talk about the amazing recitation by former Guantanamo Bay prisoner Moussa Zemmouri as he led us in Magrib followed by Qunnot for our brothers?

The Woolwich Dawah Network is another extremist grouping. This extreme: last month it was represented by Usman Ali at this meeting. Ali is the former member of al Muhajiroun who was banned for life from a Woolwich mosque after showing a video of the planes hitting the World Trade Center on 9/11 to children in the mosque while he chanted “God is great”. 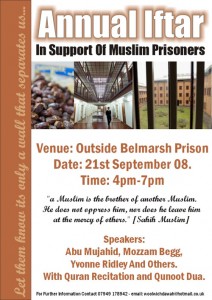 Turning back to the Belmarsh iftar, one of the regulars, appearing every year since 2006, is Uthman Lateef, also known as Abu Mujahid (“father of a holy warrior”). He is the preacher profiled here earlier this week.

It is a nasty, divisive and separatist message, presenting terrorists as good Muslims who must be supported against “the enemy” that has imprisoned them. In fact, it is a fine example of just the type of talk that should not be welcome in any institution that holds to “moderation and tolerance”, as the East London Mosque claims to do (actually it will host Lateef in April).

In the midst of an invocation of the story of Yusuf (Joseph), Lateef says:

He calls on his audience to support the prisoners for Islam. The prisoners need them just as Mohammed needed his companions:

Predictably, Islamist heroine Aafia Siddiqui appears, among other “brothers and sisters”. At that point she was in US custody. She was subsequently found guilty in open court of attempted murder. For Lateef, she and others charged or convicted with serious offences are “brothers and sisters”, and it is important for Muslims to say “we’re struggling right with you”.

Those Muslims who are in prison, Aafia Siddiqui, our sisters, our brothers, in the dungeons that they found themselves in, the same words that they want to hear from us, the Muslims, that we’re with you. We’re supporting you. You’re struggling, we’re struggling right with you. We’re struggling on your right, on your left, from before, from behind you. And we’re not going to do to you what others may have done to you by abandoning you but we’re going to assist you. [12:00]

Then he suggests that Muslims are only persecuted for their faith:

Bolstering anger and paranoia on behalf of terrorists, he continues, stressing the importance of not helping the police:

Later he offers some “it could happen to any of us” scaremongering (well, yes, if you get mixed up in terrorism, that is):

Oh prophet of Allah, you command us to ride all the way to a far place, we would do that. This is a response that this ummah needs to make, with Allah in our hearts, for one another. Because it could be any day we will find ourselves in the same situation. Any day. Any day. We have this responsibility, brothers and sisters, of brotherhood, of sisterhood, of mercy, looking at Muslims in difficulties with the lens of mercy. [19:00]

He does relish in the divine punishments facing “oppressors” of Muslims, but even this comes with a warning. Worried about judgment day? Best help Cageprisoners, and that means you:

Neither will we escape on the day of judgment. There is no thing about saying, well, “the other Muslims were doing it, and so therefore maybe I am doing it, because I’m one and the same ummah”. Or that “I remember that my neighbour set up a standing order with Cageprisoners, and so, because I told him to do that, so that means I get the reward, but I didn’t do that, but he did that, so maybe I get the same reward.” [28:00]

It is an utterly dismal speech, designed to imprison minds in a labyrinthe of paranoia, division, anger and hatred. This is what makes Mr Lateef a natural at Belmarsh iftars and the East London Mosque too.

This Friday Lateef will speak at Aston University, Birmingham, as part of the Islamic student society’s “Islam Awareness Week”. He’ll appear there again on March 17.