George Galloway was called to account last night for his relationship with the murderous Islamic Republic of Iran.

Standing behind George Galloway, all the way through the event, was James Dickie.

Who is James Dickie? Searchlight knows:

Born James Dickie, Yakob Zaki is a Muslim convert who works as an associate director of the pro-Iranian Muslim Institute, in which capacity he has contributed Holocaust denial articles to its publication Crescent International as well as the Tehran-based publication Kayhan. Addressing a rally of the Islamist group al-Muhajiroun in Wembley in April 1998 Zaki declared: “nobody was gassed to death in the concentration camps … David Irving has the right idea, destroy the Holocaust myth and you have destroyed Israel.”

Here is another picture: 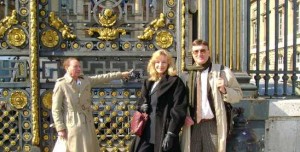 Mr Dickie is in the company of his friend, the neo Nazi Michele Renouf [link to her website]. Renouf has also been cultivating the Islamic Republic of Iran and is a frequent guest at Press TV, where George Galloway works.

Dickie/Zaki has also said that he would be “very happy” if terrorists were to attack Downing Street:

Police have confirmed an investigation is under way after Zaki…said he would be “happy” if bombers were to target Downing Street.

The Greenock-born white Muslim convert also voiced doubts that Islamic extremists were behind the suicide attacks in London and pledged to defy proposed legislation that would make it an offence to condone or glorify terrorism.

While he said he did not agree with the killing of innocent people, he would not object if there was to be a terrorist attack on Downing Street with Tony Blair in residence.

“I say go ahead, I would be very happy. The IRA did it. They had rockets that were ready to rain down on No 10,” he said.

“It would be a shame because it’s a beautiful Georgian property, I wouldn’t like to see it destroyed, but as for its inmates, well, I don’t care much for what happens to them.”

John Corrigan, assistant chief constable of Strathclyde police, said officers had interviewed Zaki about his comments this week and that “inquiries continue”. He added: “It would not be appropriate to make any further comment at this stage.”

There you have it – the convergence between the far Left, the far Right and the supporters of the Islamic Republic of Iran.

Gene adds: For all of Galloway’s righteous indignation at Holocaust deniers, they sure seem to orbit around him.