King’s LGBT have published a post on the appearance of Abdullah Hakim Quick at the university.

Following a meeting with Ryan Wain, KCLSU President, to discuss the lecture by Sheikh Abdullah Hakim Quick, which has since taken place, I should like to outline the position of King’s LGBT.

Having investigated the claims against Sheikh Quick made in Wednesday’s press release by Outrage! it is clear that at some point prior to 2004 he made homophobic remarks of a highly unacceptable nature, as summarised in the report by the Broadcasting Standards Authority of New Zealand. The decisive issue regarding our willingness to accept King’s College London (KCL) and King’s College London Students’ Union (KCLSU) decision to provide Sheikh Quick with a platform is whether he still holds and preaches these hateful opinions or has since retracted them and taken an acceptable stance. If the latter is the case we have no objections. However, if he still holds and preaches such abhorrent opinions we are seriously concerned – even though he did not touch upon these in the lecture – at the validity given to someone espousing such remarks, by hosting him at a highly-regarded educational institution such as KCL.

Following my discussions with KCLSU yesterday it was made clear that the platform he was to be given in the evening was solely to discuss the relationship between Islam and the environment. It was also apparent that KCL, KCLSU and the Islamic Society committee were not aware of Sheikh Quick’s previous homophobia prior to Wednesday’s coverage and that all of them shared in our condemnation of such remarks. Meanwhile, investigations by the College authorities failed to confirm any current incitement to homophobic hatred by Sheikh Quick and it was suggested according to available information that he is a moderate Muslim, well-respected within the field of Islamic intellectualism. In light of this and with no current evidence to suggest ongoing homophobia by Sheikh Quick, the position of KCL and KLCSU was to allow the meeting to go ahead as long as certain conditions were met:

* That KCL, KCLSU, King’s LGBT and Jewish Society representatives were all present;
* That Sheikh Quick only discussed Islam and environmentalism;
* And that if he strayed away from this into the aforementioned areas of controversy his platform would be revoked and the discussion immediately brought to a close.

In the event, the discussion passed without controversy and focused solely on Islam and environmentalism, according to our committee member present. Given this we shall continue as above to seek further clarification of his current position, before acting accordingly.

You can listen to Quick saying the penalty for homosexuality is death here (MP3).

Quick will speak at the University of East London (UEL) this weekend. 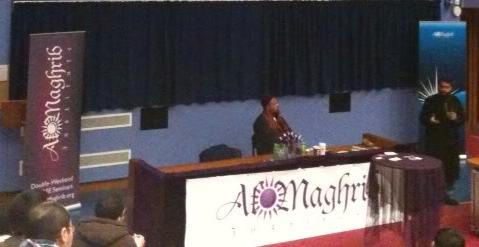 Here is Qadhi on Jews and the Holocaust:

As for 80 to 90% of the Jews in our times, they are Ashkenazis, i.e. Khazar, i.e. Russians, Turko-Russians. Look at them, white, crooked nose, blonde hairs, these are not the descendants of Jacob, these are not a Semitic people. Look at them. They don’t look like Semites. And they are not Semites. And like I’m telling you I am not inventing this from the top of my head. When I read it for the first time, I couldn’t believe it, this is just too good to be true, as they say. So I went back and I looked up Encyclopaedia Judaica, OK. Look it up yourselves. They are so embarrassed about this fact. That is why they don’t publicise it.
…
All of these Polish Jews which Hitler was supposedly trying to exterminate, that’s another point, by the way, Hitler never intended to mass-destroy the Jews. There are a number of books out on this written by Christians, you should read them. The Hoax of the Holocaust, I advise you to read this book and write this down, the Hoax of the Holocaust, a very good book. All of this is false propaganda and I know it sounds so far-fetched, but read it. The evidences [sic] are very strong. And they’re talking about newspaper articles, clippings, everything and look up yourself what Hitler really wanted to do. We’re not defending Hitler, by the way, but the Jews, the way that they portray him, also is not correct.

You can read his “clarification” here.

And here is Qadhi on Shia Muslims:

With regard to the Shiites, really they are the most lying sect of Islam. In other words, it is a part of their religion… that they are allowed to lie…. They have an ascription to one of their Imams – “Lying is nine tenths of this religion”. Now by the way I’m speaking of their religion that is based on certain knowledge. I have their main book…I have looked over it, I have read their chapters. I’m not taking this from what the Shiites say. The Shiites are allowed to lie. It is their religion to lie. Ok. Any person who knows the Shiites knows this. 90% of their own religion, by their own statement, is lies. They are allowed to lie… so don’t go and ask Shiites what they believe – go straight to their source books. Well, actually right now, you shouldn’t be reading their books…

As for gays, Qadhi’s “solution” is for them to marry a member of the opposite sex:

And remember that marriage is a solution, so you should seriously consider it. The Prophet Lut ‘alayhis salam told his people, “These are my daughters, they are more pure for you.” Some scholars say that when he said “daughters”, he is also implying the women of the town and not just his own daughters. So he’s telling the men of his community who were guilty of this crime to go and marry women, for they are better and purer for them. Marriage is a solution, because sensuality and sexuality is something that can be satisfied – rather it should be satisfied – by the opposite gender within the confines of marriage.