This is a crosspost by Terry Glavin 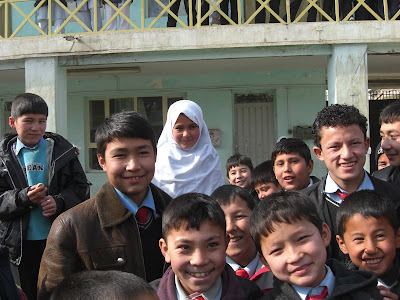 Jean-Jacques Rousseau, Rene Descartes, Rosa Parks, Isaac Newton, Albert Einstein, Ali Akbar Dehkhoda, Immanuel Kant, Abraham Lincoln, Voltaire, Baruch Spinoza, Jawaharlal Nehru. These are among the faces you will find in oil-painting portraits on a wall of a classroom in Marefat High School, each carefully and thoughtfully painted by one of the high school’s 2,800 students. They are Hazaras, Afghanistan’s poorest people, the object of pogroms and persecutions, most brutally during the Taliban time.

To get to Marefat High School from the western outskirts of the city of Kabul, you follow a long and winding road that heads up out of the Kabul plain, behind the shelled wreck of the Darulaman Palace. It doglegs and switchbacks into the foothills of the snow-covered Paghman Mountains, weaving a narrow passage through a Hazara city called Jabarhan. It is a place that confounds space and time – it is not found on any maps. It is hundreds of thousands of people living down narrow alleyways without electricity or running water, and their mud-brick, flat-roofed, close-quartered houses could be 1,000 years old, but none are more than a decade old. Its people are officially called Internally Displaced Persons. Officially, the place is called Police District 13.

After about an hour, the narrow road jumbles its way into a neighbouring Hazara city called Daste Bachi – the Bache Desert – and this place, too, does not officially exist, and these alleys, too, are alive with flocks of sheep and chickens, and there are hundreds of thousands of people here, too.

Hazaras are the people who take out the washing of the Kabulis in the plain below, and they sweep the streets of the city, and pull handcarts heavy with cauliflower and pomegranates. They are Shia of a kind, not Sunni. If you are a Hazara, you will know what it is like to extend your hand to a Pashtun, and to an Uzbek, and neither will shake your hand. You will know many such indignities.

Marefat High School is supported entirely by the poor of Daste Bachi and Jabarhan. It is governed by a board of trustees elected by the parents, the teachers and the students. Last year, the school was attacked by a mob incited by Tehran’s mullah in Kabul, Ayatollah Mohseni, from his gleaming, blue-domed madrassah down in Karte Se. The mob came screaming for Aziz Royesh, Marefat’s short and stocky principal. The school is a dirty nest of Christians, communists and prostitutes, they shouted, there are boys and girls together, Royesh is an apostate, Royesh must die.

“I was right here,” Royesh told me, standing in the rutted and muddy alley outside the school. “The boys quickly locked the doors to the school, and I ran into my house, right there.” 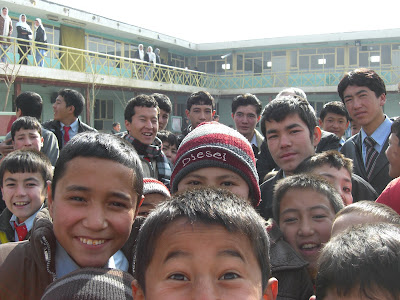