Jenny Tonge interviewed by Lauren Booth, her fellow Palestine Telegraph patron, on Iran’s Press TV, which is a purveyor of Holocaust denial poison.
***

Here’s another champion for Jenny Tonge: Ibrahim Hewitt. He is the chairman of Interpal, a charity that is closely linked to Hamas and banned for that reason in the US, Canada and Australia. 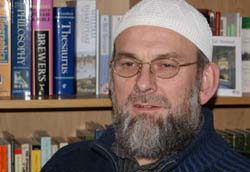 Writing on Daud Abdullah’s Middle East Monitor, where he is the “senior editor”, Hewitt blames “the powerful Israel lobby” for Tonge’s fall:

Liberal Democrat leader Nick Clegg has sacked Baroness Jenny Tonge as his party’s health spokesperson in the House of Lords. Ostensibly over a reported remark about allegations of human organ harvesting by the Israeli Defence Forces in Haiti, it is suspected that Clegg has acted to protect his party from attacks by the powerful Israel lobby in Britain.

Never mind that Tonge has apologised. Hewitt doesn’t find her comments offensive at all. No, she simply expresses “concern” for victims of the Israeli-Palestinian conflict:

Astonishingly, therefore, Jenny Tonge has been sacked for calling on the IDF to clear its name. According to the website of Friends of Al-Aqsa, “following discussions with the Baroness it appears that her words have been taken out of context by some members of her party and imbued with double meaning where none was intended”. It takes a real stretch of the imagination to think that Baroness Tonge’s remarks are in any way offensive, and yet she has lost a front-bench role for the second time because of her openly-expressed concern for all who are wronged in the Israel-Palestine conflict.

Jewish votes, that’s what it’s all about, Hewitt suggests:

Under Nick Clegg’s leadership the Liberal Democrats have shown a great deal of balance on the Israel-Palestine issue, perhaps too balanced, and that has been due in large part to Jenny Tonge’s humanitarian concerns. In the run-up to the British General Election, is the Israel lobby pushing Mr. Clegg to take a more openly pro-Israel stance? This is not beyond the realms of possibility, and the inclusion by the Jewish Chronicle of a quotation from a LibDem parliamentary candidate in a north London constituency suggests that Clegg has made what he hopes will be a vote-winning decision.

The Jews have gotten to the Conservatives too, Hewitt says in another Middle East Monitor article titled “Cameron’s Conservatives already dancing to Israel’s tune”:

If the Conservative Party wins the next General Election in Britain, as is expected by many, David Cameron’s government will refuse to talk to Hizbullah in Lebanon. You won’t find that declaration of intent in any Tory policy document or even in any British newspapers; you need to read the Jerusalem Post. Yes, the Jerusalem Post, for it looks as if the Tories are now announcing policies in Israel first in an echo of US politics where candidates for the presidency have to announce in advance their allegiance to the Zionist state.
…
According to media reports, in January 2009, during Israel’s brutal assault and invasion of Gaza, Pauline Neville-Jones warned that the war would “encourage Islamism and Islamic terrorism”. She could, of course, have said that the war was wrong and broke legal and moral conventions, and called upon the Israelis to withdraw and change their policies. The fact that she, apparently, chose not to, speaks volumes about the priority that an incoming Tory government will have, a priority that places the security of Israel above the security of Britain and which in part explains why David Cameron’s security spokesperson opted to announce future policies in a foreign state before doing so in this country.

If you would like to know more about Hewitt’s Islam, you can read his “What Does Islam Say?” pamphlet here (pdf) on HP. He’s keen on brutal Islamic punishments:

The laws on crime and punishment are, like many other things relating to Islâm, often misinterpreted by non-Muslims as being unduly harsh, cruel and ‘barbaric’. However, Islâmic law in this respect is there to ensure that not only is justice done, but it is also seen to be done. The welfare of the whole society must be looked after, and those who would disturb social order must be deterred.

An Islâmic society is based upon strong family ties between husband, wife and children. Adultery shatters such ties with catastrophic consequences for the family and society at large (divorces, family break-ups, one-parent families in need of state support, etc.). Hence, adultery also carries a very serious penalty.

For the crime of apostasy, it should be borne in mind that in an Islâmic State, Islâm is the basis of the State, not just the State religion. Any act of apostasy that results in open rebellion against Islâm is, therefore, an act of treason. Even in Britain, the penalty for high treason is death.

He’s certainly not keen on the wicked gay lobby, which has somehow managed to make people think homosexuality is not a mental illness:

Up until 1970 the British psychiatric establishment broadly classified homosexuality as a ‘mental disorder’. In 1973 the Nomenclature Committee of the Diagnostic and Statistical Manual of Mental Disorders (DSM), the official reference book for diagnosing mental disorders in America and throughout much of the world, responding to pressure from homosexual activist groups, voted for the elimination of homosexuality’ from its official diagnostic categories of mental illness. (See: “An Instant Cure”, Time magazine, 1 April 1974, p. 45)

Islâm, like most other major faiths of the world, categorically forbids homosexual practices (sexual relations between two men or between two women), regarding them as a great sin. In a society under Islâmic law, such would be severely punished.
…
Muslim jurists have held differing opinions concerning the punishment for this abominable practice, some slating the punishment for fornication, while some stating the death penalty for both the active and passive participants. It is important to mention that these rulings are not given in an anarchic sense where a Muslim takes the law into his own hands. Rat her for these punishments to be implemented, due legal process needs to be carried out, which can only be done under a state implementing Islamic Law. While such punishments may seem cruel, they have been suggested to maintain the purity of the society and to keep it clean of perverted elements, allowing for the spiritual development of its members in an ideal environment. The spread of this depraved practice in a society disrupts its natural life pattern and makes those who practice it slaves to their lusts, depriving them of decent taste, decent morals, and a decent manner of living.

Indeed, for Hewitt, the best thing for gays to do is to think of homosexuality as akin to paedophilia or incest:

Whilst Islâm forbids homosexual practices, it does not seek out those with homosexual desires with a view to persecute them. If people have such desires, they should keep them to themselves, and should control their desires to avoid forbidden practices. The advice would be the same as, say, to someone who had sexual desires for minors or for close family: that having the desires does not legitimise realising them. Islâm aims at closing all avenues that might encourage evil practice which could corrupt and pollute the whole society.

Civilisation itself is at risk!

The concept of what constitutes ‘acceptable’ behaviour in society needs to be redefined. It is often said that if you want to know the future, look into the past: history shows that some civilisations collapsed once homosexuality was tolerated as normal behaviour.

Perhaps the creepy Christisons, a pair of retired CIA officers, could be next to ride to the rescue. The pages of Middle East Monitor are open to them. Here’s a book review from Kathleen. It notes sneaky Jews even use workers’ and civil rights to advance their cause:

Zionist lobbyists continued to work as assiduously, with results as “miraculous,” throughout the twentieth century, gaining influence over civil society and ultimately over policymakers and, most importantly, shaping the public discourse that determines all thinking about Israel and its neighbors. As Alam notes, “since their earliest days, the Zionists have created the organizations, allies, networks, and ideas that would translate into media, congressional, and presidential support for the Zionist project.” An increasing proportion of the activists who lead major elements of civil society, such as the labor and civil rights movements, are Jews, and these movements have as a natural consequence come to embrace Zionist aims.

Business, the media, films and academia have also fallen under the control of the devious ones:

Alam’s conclusion—a direct argument against those who contend that the lobby has only limited influence: “It makes little sense,” in view of the pervasiveness of Zionist influence over civil society and political discourse, “to maintain that the pro-Israeli positions of mainstream American organizations . . . emerged independently of the activism of the American Jewish community.” In its early days, Zionism grew only because Herzl and his colleagues employed heavy lobbying in the European centers of power; Jewish dispersion across the Western world—and Jewish influence in the economies, the film industries, the media, and academia in key Western countries—are what enabled the Zionist movement to survive and thrive in the dark years of the early twentieth century; and Zionist lobbying and molding of public discourse are what has maintained Israel’s favored place in the hearts and minds of Americans and the policy councils of America’s politicians. 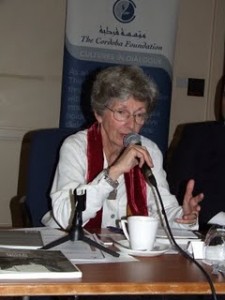 Kathleen Christison at a London conference organised by Anas al Tikriti’s Cordoba Foundation and Middle East Monitor and chaired by John McHugo of Liberal Democrat Friends of Palestine. The Christisons have also been hosted by Amnesty UK.

Come on Kathleen, saddle up and ride to Jenny’s rescue! You have Ibrahim Hewitt’s fine example. And here is another inspiring piece, this time by Kian Mokhtari and published by the visionaries at Iran’s Press TV:

The Lib-Dem health spokeswoman has already been vilified by the Western mouthpiece media. Dejected and in full receipt of the liberal Western democracy’s spite, another free voice has been stifled as the juggernaut of Israeli lobby pummels one more humanitarian intellectual into the ground for daring to speak out about the truth.

Actually the fuss may have been made about nothing; because the Baroness had only called on the Israeli authorities to set up an investigative body in order to protect their own medical military personnel’s reputation. She asked for an independent probe by the Israelis themselves, after overwhelming evidence on organ theft by mafia style gangs within the Israeli army had surfaced earlier.

So the grounds for the Baroness Tonge’s concern certainly did exist given freelance journalist Donald Bostrom’s article, “They plunder the organs of our sons” has already been published in Sweden’s largest circulation daily Aftonbladet. The article puts beyond any doubt the Israeli soldiers’ abduction of young Palestinians from the West Bank and Gaza Strip and the return of their bodies to their families with organs removed. The organs were then sold on to a number of New York rabbis, behind the entire human organs trafficking operation.
…
In the crazy world that we have inherited after WWII, we are gagged and bound by a number of terms that were designed by Israel’s designers to libel at will anyone who dares speak out against their excesses. The examples of the legacy of verbal garbage that the Israeli lobby has injected into journalistic phraseology over the past six-decades are not difficult to find.

The evil Zionists have even stolen our language!