The Palestine Telegraph has come out fighting for its patron, Jenny Tonge:

London and Gaza, Feb. 13, 2010 (Pal Telegraph) – The dismissal of Baroness Jenny Tonge from her post as health spokesperson for the British Liberal Democrat party discourages freedom of expression and the search for truth, says the editorial team of the Palestine Telegraph.
…
“Our columnists speak only for themselves, not for the views of the editorial staff or its Board of Patrons,” the Palestine Telegraph editorial team said in a statement. “In addition, Baroness Tonge was clearly not making any accusations herself, but rather, calling for an investigation that would dispel the cloud of suspicion. We would think Israel and its supporters would welcome an opportunity to clear the state’s name.”
…
The Palestine Telegraph is a grassroots media outlet based in Gaza and the United Kingdom. Its goal is to provide comprehensive coverage of news related to the Occupied Palestinian Territories and the Middle East. It has been under attack for the past few months from Israeli Web sites in the UK and the United States.

Yes, of course, Tonge and the Palestine Telegraph only have Israel’s interest in mind. They’re just trying to help.

Nice touch on “Israeli Web sites in the UK and the United States”. Presumably British and American Jews are not real Britons or Americans.

UK, February 14, 2010 (Pal Telegraph) – It is with great sadness that we see a staunch supporter of the Palestinian people removed from her position as Health Spokeswoman for the Liberal Democrats in the House of Lords. This is a clear sign of the political power that the Pro Israeli Lobby have over all political leaders and their party. This does not stop here in the UK but also extends throughout the US and the EU. So what caused such a dramatic response from the Lib Dems?

I guess dear Jenny has been fighting the traitors of all political parties for some time especially those who appear to pay more attention to their election campaign funds than keeping a moral and ethical stance in the Houses of Parliament. They appear to protect those that financially prop them up in return for support or favour of anything that aids the Pro Israeli cause. The Friends of Israel are certainly not a group to be taken lightly and should you cross swords with them you can expect severe repercussions as Jenny has now found out.

Some time ago I wrote about who controls the power of politics in the west and I was shocked to see the amounts of money involved in this devious manipulation of our so called democratic political system.

Eyre is upset, because Tonge tells the troof:

If we cast our mind back to 2006 we saw Jenny Tonge highlighting this very fact in at a Lib Dem Conference back in 2006 when she said: “The pro-Israeli lobby has got its grips on the western world, its financial grips. I think they have probably got a certain grip on our party.” The Liberal Democrat Friends of Israel leapt on the remarks when Ming Campbell said “I have acted with the maximum powers at my disposal at this time. I have written to Baroness Tonge dissociating myself and the party from her deeply offensive remarks and what I believe to be their clear anti-Semitic connotations. I have asked for a review of the disciplinary powers available to the Liberal Democrat leaders in both the House of Lords and Commons.” I am sure that when Ming Campbell made this announcement his party funds would have been boosted significantly.

You can read his blog here.

I sincerely wanted to welcome you all in such a very nice and gentle way but I carry so much pain for the innocent men, women and children of past and current war zones that have sucumbed to these evil uranium weapons. We must all try to prohibit DU/EU or any other “Dirty Weapon” and learn to live in peace. We in the west have to close all bases that exist on Islamic soil and learn to trade instead of fighting.

However, if you are not a pacifist or you are (gasp) a Zionist, stay away:

Anyway, I’d like to call for an inquiry too. The question is this: why does anyone in British politics work with the Palestine Telegraph, a far right hate site? Consider this piece (Google cache link), published today. It would be at home on Stormfront or a KKK website:

There are sadly far too many sleeping Consciences belonging to the thousands (if not millions) of people who choose to be Sheeple, as David Icke refers to them, totally oblivious of the “real world,” living in their own makeshift cocoon, their very own Matrix world, and unaware of the suffering and oppression that is being played out in those countries/States so far away from their shores.
…
It turns out that WW1 and WW2 were planned in advance for the sake of a group following the dictates of Zionism, a non religious socio-political Ideology which puts their leaders at the top of a Pyramid, while the rest of mankind, their “servants” are piled in a heap right at the bottom, unaware of what is being instigated at the pinnacle of this structured pyramid!! It is not too dissimilar to a Social Class Ladder: the working class, that is the masses or, I prefer to use a stronger and more apt term, the Servants/Slaves; then we have the Middle class, the middle men who in turn receive their delegated orders from the higher echelons of society, their MASTERS, the Elite, Aristocracy, the “Illuminati Factor” in fact, the billionaires in Power, who are covertly controlling our world and our communities and lives, choosing methods that are abhorrent to a fair, just ethical moral Society.

These Masters, controlled by such luminaries as the Rothschild Dynasty, have been working in the wings establishing their Corporate Financial and Imperialist ,Colonialist Empire, getting richer by the day, their power increasing by the hour, while their servants, their minions, their puppets do all the hard work, shed blood sweat and tears, and physical and mental sacrifice.
…
The first few years of the new century has experienced far too much bloodshed. In the last years of the last century, we faced the Bosnian war and the first Gulf War in Iraq, killing thousands of innocent Iraqis, who then had to face the Sanctions, imposed by the bully and controller of the UNITED NATIONS, the Zionist controlled USA and its partner in crime Britain, whose past colonial practices are accountable for much of what has transpired in the hot bed of bloodshed in the Middle East, against the majority Muslim Arabs, the new CRUSADE of the 21st Century for our new Imperial Neo-Con Tyrants of the Illuminati/Skull/Bones/ Zionist variety.
…
Here we have a racist State that was “created” for the sole purpose of housing Exclusivity to the morally superior Jews only. This they justify based on what they claim, a bit like George Bush himself, “Divine” intervention and selection, that is, they were the “Chosen Ones”. But what is wrong with this? How can the God of the Universe, the Mentor, Creator and Father of Mankind, in all His infinite Mercy and Love, justify this biased exclusivity, to the tragic cost of the rest of Humanity? Surely God should love us all equally and not turn His back on the rest of His Family??

We then have another scenario where these Jews biblically justify their violent actions against the people of biblical Palestine because it is “ordained to them”, written in their holy scriptures, their Torah/Talmud and the Old Testament in Deuteronomy in which, when they sacked Jerusalem upon arriving from afar, from “distant lands”, God supposedly gave them permission to slaughter everyone in sight, men, women, children, young and old, and only saving and taking for themselves the virgin young girls!!
…
Here we have a Nation that is comprised of West/East European immigrants, the vast majority of whom have not an ounce of true Semitic Jewish blood or ancestry, but are Converts, and who, for the most part, are totally irreligious and follow, not a faith but a racist ideology/dogma, Zionism.
…
George Bush ought to take a leaf or two out of his “moral and ethical sermon” and punish Israel for this inhuman behaviour that debases women and young girls. As he himself stated: This commerce in human life generates billions of dollars each year, much of which is used to finance organized crime”. And he should know, as his own father’s business ventures are involved, along with his mentor Dick Cheney and Donald Rumsfeld

Surely Israel does not need the billions it receives from American taxpayers as it receives ample funds from this evil trade as well as the revenue it also gets from its Arms and Drugs smuggling and espionage, selling secrets that its agents, be they Art students or Mossad, sell to such nations as China and India, as well as trading in Human Organs at the expense of dead young Palestinians whose organs are taken out and sold to world markets or used within Israel itself.

This is the sick far right world of the Palestine Telegraph, which is headed by Sameh Habeeb.

Well, have a look at the name at the bottom of this list of speakers and organisers of a Labour Friends of Palestine meeting at Westminster on March 1. Note too that Tonge, curiously listed as an MP, will attend.

The PRC is of course the Palestinian Return Centre, a Hamas support outfit. Its last annual meeting was addressed by Hamas leader Ismail Haniyeh, who was grateful for the “solidarity”:

There is no doubt, that by this conference you send signs of solidarity and support for your people in Palestine. No doubt that this conference doubles our capability to remain steadfast. By your good efforts our abilities to challenge and face the aggressors grow more and more and our spirits grow as well so we forget our wounds and pain.

The European Campaign to End the Siege on Gaza is a front for the PRC, housed in the PRC’s own office. The campaign too is backed by Tonge, as well as Labour’s Lord Ahmed and MPs Brian Iddon and Roger Godsiff.

Last year, the campaign published a full translation of the blood libel by Swedish newspaper Aftonbladet, without any comment. It has since been moved behind a password wall, but you can read it here in pdf format, as produced by the pdf function on the campaign’s website. 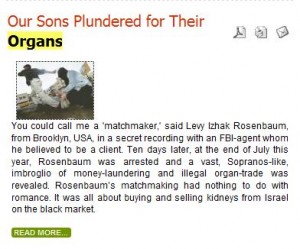 Consider just how grotesque the Swedish blood libel article is. Then look again at the vile Stormfront-style piece from the Palestine Telegraph quoted above. By the standards of Labour Friends of Palestine, no one in that group should object to a right wing MP holding a Westminster seminar for David Duke or Nick Griffin. Nor should Jenny Tonge.

When will the leaders of the Liberal Democrats and Labour put a stop to the promotion of far right haters inside their parties?

Are there any activists in either party who are prepared to take on this essential fight?