The Haiti blood libel of Sameh Habeeb’s Palestine Telegraph, covered here last week, has been disappeared from the website.

This is probably due to a Zionist conspiracy. Perhaps Palestine Telegraph patron Jenny Tonge could call for an inquiry into this ominous development as well.

For now, the article is still available in Google cache and here as a pdf.

“An unconfirmed report by the Russian Northern Fleets says the Haiti earthquake was caused by a flawed US Navy ‘earthquake weapons’ test before (they) could be utilized against Iran. (Something) went ‘horribly wrong’ and caused the catastrophic quake in the Caribbean, the website of Venezuela’s ViVe TV recently reported, citing the Russian report.”

After its release, Hugo Chavez called it a drill, preparing to cause an earthquake in Iran. Russia Today said Moscow has the same weapons. The unconfirmed Russian report said America carried out a similar test in the Pacific Ocean, causing a 6.5 magnitude quake near Eureka, CA. No deaths or injuries were reported, but many buildings were damaged.

ViVe said the US Navy may have had “full knowledge” of the test’s damage potential, and speculated it was why Deputy Southern Command General PK Keen was in Haiti when the quake struck, preparing to act in case of a disaster, perhaps an engineered one. In his January 21 Global Research article, Michel Chossudovsky said:

“A Haiti disaster relief scenario had been envisaged at the headquarters of US Southern Command (SOUTHCOM) in Miami one day prior to the earthquake (since) pre-disaster simulations pertain(ing) to the impacts of a hurricane in Haiti” were conducted.

When the quake struck, TISC was in “an advanced stage of readiness.” The next day, SOUTHCOM implemented the system. “The (DOD’s) Defense Information Systems Agency (DISA)” set up a relief effort among “a range of Defense units and various” NGOs and aid groups operating “as part of a carefully planned military operation.” Did DOD have advance knowledge of the quake so could act immediately when it struck? Was the drill’s timing a coincidence or something more sinister?

Next the sharp-eyed correspondent notes a certain disturbing parallel:

On the morning of September 11, 2001, the CIA was running “a pre-planned simulation to explore the emergency response issues that would be created if a plane were to strike a building.” Held at the Agency’s Chantilly, Virginia Reconnaissance Office, it simulated a small jet hitting one of its four towers after supposedly experiencing mechanical failure. The media ignored it the way it’s suppressing the January 11 drill. It raises serious questions and great suspicions.

Earlier in October 2000, the Defense Protective Services Police and Pentagon’s Command Emergency Response Team conducted another exercise, simulating a plane striking the Pentagon – called “the Pentagon Mass Casualty Exercise.” Coincidence again, or were these drills part of readiness planning for 9/11, with advance knowledge of what was coming? Was similar Haiti planning also preparatory to the Pentagon’s militarized takeover? Was the catastrophe natural or engineered, and is there another way to trigger it?

Who is the correspondent? Stephen Lendman, author of the Haiti blood libel piece, a frequent contributor to the Palestine Telegraph, and “Research Associate of the Centre for Research on Globalization”.

The Centre is an insane extremist outfit. On its website you will find one weird piece after another. Examples include no end of 9/11 troofery, praise for Milosevic, who “proved resistance is possible” but was murdered by “criminals [who] enjoy power in the Hague”, and this from James Petras:

The Israeli leaders are perfectly aware of the ‘free hand’ with which their ‘Fifth Column’ operates, up to and including their prominent role in defense of genocide. Israeli leaders are assured that even when they launch a bigger, bolder and more destructive war (including the possibility of pre-emptive nuclear strike) against Iran or Syria/Lebanon, they can count on the million-member US Zionist lobby securing White House and US Congressional support. Israeli leaders now know for a fact that the anti-war movement will once again engage in inconsequential protests against the ‘shadows of power’ and not the real power wielders embedded in the Zionist Power Configuration.

Petras appears in the Palestine Telegraph too:

While the Lobby speaks for less than 2% of the US electorate, its influence on foreign policy far exceeds the great majority who have neither comparable organizational nor financial muscle to impose their views.

Never in the history of the US republic or empire has a powerful but tiny minority been able to wield so much influence in using out nation’s military and economic power and diplomatic arm-twisting in the service of a foreign government. Neither the Francophiles during the American Revolution, the Anglophiles in the Civil War and the German Bund in the run-up to World War Two, nor the (anti-China) Nationalist Taiwan Lobby possessed the organizational power and sustained political influence that the ZPC has on US foreign and domestic policy at the service of the State of Israel.

For Petras, progressive Jews are part of the problem:

Because of these fundamental considerations, we cannot oblige our Jewish ‘progressive’ colleagues and compatriots and refrain from confronting the Zionist Lobby with force and urgency. Too many of our freedoms are at stake; too little time is left before they succeed in securing a greater military escalation; too little of our sovereignty remains in the face of the concerted effort by the Lobby and its Middle Eastern ‘expert-ideologues’ to push and shove us into a new and more devastating war with Iran at the behest of Israel’s pursuit of Middle East dominance.

No other country, abuser or not, of human rights, with or without electoral systems, has the influence over our domestic and foreign policy as does the state of Israel. No other Lobby has the kind of financial power and organizational reach as the Jewish Lobby in eroding our domestic political freedoms or our war-making powers. For those reasons alone, it stands to reason, that we American have a necessity to put our fight against Israel and its Lobby at the very top of our political agenda.

This Latuff cartoon accompanies the article: 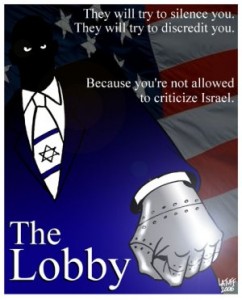 Here’s Habeeb himself, rustling his Jewish fig leaves and then sticking the knife into Israel for “genocide”:

London, February 8, (Pal Telegraph, by Sameh Habeeb) – Having commemorated Holocaust Memorial Day with survivor Hajo Meyer and some other Jewish friends after a talk at Goldsmith University last week, it is clear to me that Palestinians have many common experiences with the survivors of the Holocaust.

Meyer’s imprisonment in the ghetto and ordeal at checkpoints is a stereotypical image in occupied Palestine. I was personally amazed to hear him admit that Palestinians’ suffering is close to that of the Holocaust. I was amazed because I heard it not from a Palestinian, but from a Jewish man who has suffered a lot.

That article features grotesque side-by-side images from the Shoah and Gaza which I will not reproduce here. The “Israelis are Nazis” message is crystal clear, no matter how carefully Habeeb hedges his words.

Blood libels, absurd anti-American conspiracy theories, Holocaust memory abuse – this is the kind of lunatic hatred the Palestine Telegraph wallows in, repeatedly, scurrying out of the filth only when called on it, and then without apologising or changing.

The pro-Hamas Palestinian Return Centre (PRC) has employed similar tactics, trying and failing to ignore and then lie its way out of the fiasco that followed its invitation of Hungarian neo-fascist Krisztina Morvai to a London conference.

Labour MP Neil Gerrard had the good sense to pull out of that conference as news of Morvai’s invitation spread.

Yet “Labour Friends of Palestine” is willing to work with Habeeb, this time wearing his PRC hat, to arrange a PRC meeting in Westminster on March 1.

It does not matter – in this context – if the Labour party in power has been “friendly” to Israel or not. Those policies, whatever they are or may be, should have no bearing on a strong and clear anti-racist stance at home.

As for foreign policy, those who support and apologise for Hamas and Hezbollah are wreckers, not contributors to any peace process. They should be opposed.

The bottom line is this: Labour MPs Jeremy Corbyn, Martin Linton and Phyllis Starkey, among others on this fringe, are no friends of anti-racism or peace. Their promotion of extremists should be curbed by their party.

I doubt it will be.