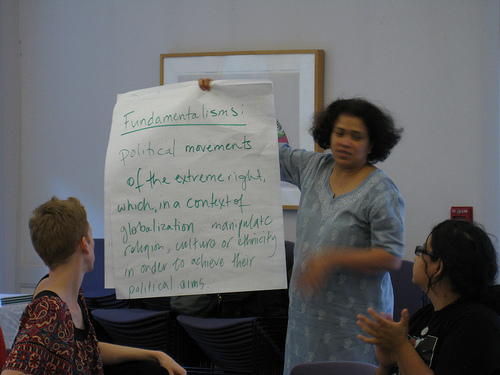 Your Article: ‘Amnesty International is ‘damaged’ by Taliban link’

I was shocked and extremely disappointed to see your article in today’s Sunday Times make no reference at all to the questions you so ardently sought to have answered (as mentioned below) and, that I explained to you in some detail in our telephone conversation yesterday.

Your headline makes a serious accusation: that it proves to expose a tangible link between Amnesty and the Taliban. Can I ask exactly who in the Taliban you are referring to that is either linked to Amnesty or me?

It seems very odd that your article, which is entirely about Amnesty’s relationships with me, carries very little in the way of responses from me which you so clearly went out of your way to seek. Why is that?

When asked about the nature of my relationship with Amnesty you make no mention of my response: that I work very closely with them and that it stretches back to the time that Amnesty worked with my father when I was in Guantanamo.

I told you clearly that if you wanted to know my (and Cageprisoners’) views about Awlaki to refer to the article that is on our website: http://www.cageprisoners.com/articles.php?id=30886 in which you could have quoted, had you wished, the following:

“Cageprisoners never has and never will support the ideology of killing innocent civilians, whether by suicide bombers or B52s, whether that’s authorised by Awlaki or by Obama. Neither will we be forced into determining a person’s guilt outside a recognised court of law.” This article also deals with any concerns about the recent Christmas day plot – something you asked us about.

When asked specifically about the Taliban I told you my view: that I have advocated for engagement and dialogue with the Taliban well before our own government took the official position of doing the same – only last week – although, I did not say, like the government, we should be giving them lots of money in order to do so.

I also clearly told you, though you deliberately chose to ignore, that I had actually witnessed what I believe were human rights abuses under the Taliban and have detailed them in my book, from which you conveniently and selectively quote. I added that the US administration had perpetrated severe human rights abuses against me for years but that didn’t mean I opposed dialogue with them. I even told you that Cageprisoners and I have initiated pioneering steps in that regard by organising tours all around the UK with former US guards from Guantanamo and men who were once imprisoned there. Cagreprisoners is the only organisation to have done so. (One of these soldiers, upon in response to your article sent this message to me: They are attacking you and your causes…don’t forget you have real support by some of us ex-Soldiers who have seen the light… I expect he too will be accused by your likes of being brainwashed by me). Instead, you simply say, without qualification, ‘He defended his support for the Taliban….’

Had you – and Ms Sahgal no doubt – done your homework properly you’d have discovered also that I was involved in the building of, setting up and running of a school for girls in Kabul during the time of the Taliban, but of course, that wouldn’t have sat well with the agenda and nature of your heavily biased and poorly researched article.

In relation to MS. Sahgal, I told you – and you were fully aware – that I appeared on a BBC Radio 4 show, Hecklers, alongside her, Tariq Ramadan, Lord Nazir Ahmed, Tahmina Saleem (ISB) and Daud Abdullah (MCB). I told you that her analysis of the situation on this programme was so poor and skewed that she referred to all of us as ‘partners of the government in the war against terror’ until I reminded I was sitting on the panel.

I told you too that I have never since spoken to Ms. Sahgal and that if she had any concerns about my work she has never put them to me and that I found it most odd that she found it more appropriate to discuss this in the media first. Again, had you done your research properly you’d have made some reference to our first meeting on Radio 4 where I iterated that the way to solve conflicts can be found in the Northern Ireland model (engaging with ‘terrorists). I have engaged in several such initiatives, some of them hosted by Amnesty, asking people to look at this episode as a place to find solutions. Bizarrely, Ms. Sahgal, through her argument, seemed to reject this view. Whilst it gives me no personal pleasure to hear of the suspension of Ms. Sahgal for holding her view the newspapers were not the right place to air them without first putting them to Cageprisoners or me.

You had also interviewed my colleague, Asim Qureshi, but again failed to mention anything thing he said to you in relation to the work of Cageprisoners and our relationship with Amnesty International.

To conclude, I believe your article, is written in a style clearly designed, intentionally or by negligence, to damage our relationship with human rights organisations and discredit the work we do in advocating for the rights of those who have suffered terrible human rights abuses. As such, I have referred your article to your editor and the Press Complaints Commission as a formal and major complaint and, to my lawyers to pursue legal action.

***
Asim Qureshi of Cageprisoners on jihad:

Gita Sahgal is a member of a nutty group called Women Against Fundamentalisms. In a 2006 radio programme she defended the view that by consulting the Muslim Council of Britain the government was encouraging fundamentalism. In the same radio programme she also accused Tariq Ramadan of being a fundamentalist. Had she actually read any of his books, Professor Ramadan politely inquired. It was quite clear that she hadn’t. In fact she was completely unfamiliar with his writings. However, she did know that he was a fundamentalist.

It appears that Sahgal has now been suspended by Amnesty. Their mistake was in ever employing a crank like that in the first place.

I have heard some nonsense in recent years but this quite possibly tops it all. I have had the absolute pleasure of working with Moazzam Begg on numerous occasions, through the Stop the War Coalition, twice inviting him to speak at The University of Essex whilst I was the SU President. I have had long discussions with Moazzam and there were issues we had disagreements on. But to label the man as a supporter of the Taliban is inaccurate and offensive.
…
So I congratulate Amnesty for their tireless campaigning for the closure of Guantanamo Bay and for their defence of the victims of the war on terror. And Moazzam Begg should not be hounded and accused of extremism by those who should really know better. A couple of newspaper articles are nothing compared to three years in illegal detention, but Moazzam does not deserve that treatment. For somebody who has been through what he has and is still standing today, fighting injustice and campaigning for what is right, the man should win a medal.

Sadly, the only thing that hangs around his neck is the memory of Guantanamo and the relentless racism that just won’t go away.

Chardonnay Chap
I’m on Amnesty’s side here. I can’t help but see Bright’s argument as being, “if I think you’re guilty, who cares if you get a fair trial? and if you support terrorism AND you’ve been accused of terrorism and taken to Guantanamo Bay, who cares if legal niceties were observed or not? I, for one, don’t want to know you.”

Commenter Flying Rodent
Aye, right. I imagine that if I told the Times that my employers were in league with the Taliban, and they printed it, my boss would probably give me a raise.

Commenter splinteredsunrise
She’s also associated with Women Against Fundamentalism, one of those very strident groups (like the Worker-Communist Party of Iran) much beloved by that element of Decency that sets great store by “secularism”. Hence occasional references to support for “secular Muslims”, which usually seems to mean Ayaan Hirsi Ali.

And she hates Tariq Ramadan, which can only enhance her standing with HP Sauce.

In the comments at HP über-Decent NeilD posted that absurd clause from the Euston Manifesto, which says it all.

he violation of basic human rights standards at Abu Ghraib, at Guantanamo, and by the practice of “rendition”, must be roundly condemned for what it is: a departure from universal principles, for the establishment of which the democratic countries themselves, and in particular the United States of America, bear the greater part of the historical credit. But we reject the double standards by which too many on the Left today treat as the worst violations of human rights those perpetrated by the democracies, while being either silent or more muted about infractions that outstrip these by far. This tendency has reached the point that officials speaking for Amnesty International, an organization which commands enormous, worldwide respect because of its invaluable work over several decades, can now make grotesque public comparison of Guantanamo with the Gulag, can assert that the legislative measures taken by the US and other liberal democracies in the War on Terror constitute a greater attack on human rights principles and values than anything we have seen in the last 50 years, and be defended for doing so by certain left and liberal voices.

Basically they want to undermine AI because it hinders the War On Terror by insisting that the US and other Western powers actually abide by the same principles that they claim to be upholding. And of course you also get at HP those who hate AI because it criticises Israel.