Aafia Siddiqui is a doctor who left Pakistan to attend MIT and Brandeis in the USA. After completing her studies, she returned to Pakistan, where she divorced her husband.

In March 2003 the FBI issued a global alert for Siddiqui. This is what they say about her:

US officials allege that Ms Siddiqui has links to top al-Qaeda suspects. They say that the mother of three is married to Ali Abd al-Aziz Ali, known as Ammar al-Blackuch, a nephew of Khalid Sheikh Mohammed, the self-proclaimed mastermind of the September 11 terror attacks, and a cousin of Ramzi Yousef, who was convicted of the 1993 bombing of the World Trade Centre in New York.

The precise whereabouts of Aafia Siddiqui between 2003 and 2008 are unclear. The second half of this post explains why.

In July 2008, the FBI arrested her in Afghanistan. She grabbed a US Army officer’s M4 rifle and started to shoot at them. She was herself shot, and was tried in the United States for attempted murder and assault.

She has now been convicted.

In the world of jihadists and their supporters, the story of Aafia Siddiqui is a rather different one. According to them, between 2003 and 2008, Ms Siddiqui was held in a secret prison in Bagram as Prisoner 650. Her children were stolen from her. Such was the fate of the woman that they call the “Grey Lady of Bagram.”

A number of groups and individuals have been pushing the “Grey Lady of Bagram” story. Chief among them in the United Kingdom has been the discredited Cageprisoners – whose other cause celebre is the Al Qaeda preacher, Anwar Al Awlaki – and PressTV’s Yvonne Ridley, who is the patron of that organisation. She has toured around the US and the United Kingdom, spreading the kidnap conspiracy theory far and wide.

Here is a taste of Ridley’s “journalism”:

Dr Aafia Siddiqui is a bright, intelligent woman who has been through hell having being kidnapped, tortured in secret prisons, gunned down by US soldiers and renditioned to America where she is now facing attempted murder charges against those who shot her .

Only in the cock-eyed crosshairs of George W Bush’s War on Terror could this happen and I hope to God that the jurors who will go through the evidence during the next few hours, if not days, see through this rotten legacy and recognise the case for what it is … a tissue of lies enveloped in a web of deceit.

Cageprisoners has been running wall-to-wall coverage of the trial. Here is the graphic that they are using to promote that coverage: 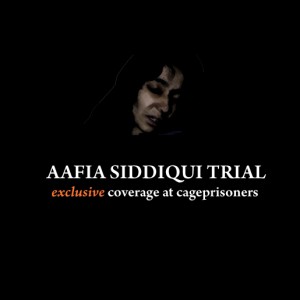 The notion that Aafia Siddiqui was kidnapped, held hostage in Bagram, and had her children taken from her is denied by the US:

Describing Siddiqui’s conversations with an FBI agent who spent time with her at Bagram Air Base while she was receiving medical care there, the prosecutor challenged Siddiqui’s story of secret detention.

“At Bagram,” the prosecutor insisted, “you told Special Agent Sercer that you had been in hiding for several years.”

The prosecutor got a chance to develop the story further when Special Agent Sercer, an FBI intelligence analyst, took the stand. Asked whether Siddiqui had discussed her whereabouts during the years before her 2008 arrest, Sercer said that Siddiqui had said she’d been in hiding.

“She would move from place to place,” Sercer said Siddiqui had told her. “She married someone so that her name would be changed. She stayed indoors a lot.”

The ‘kidnap’ story is also denied by her ex-husband. This is what he told The Guardian:

That night I went to see Siddiqui’s ex-husband, Amjad Khan. He ushered me through a deathly quiet house into an upstairs room where we sat cross-legged on the floor. He had a soft face under the curly beard that is worn by devout Muslims. I recounted what Fowzia told me. He sighed and shook his head. “It’s all a smokescreen,” he said. “She’s trying to divert your attention.”

The truth of the matter, he said, was that Siddiqui had never been sent to Bagram. Instead she spent the five years on the run, living clandestinely with her three children, under the watchful eye of Pakistani intelligence. He told me they shifted between Quetta in Baluchistan province, Iran and the Karachi house I had visited earlier that day. It was a striking explanation. When I asked for proof, he started at the beginning.

Their parents, who arranged the marriage, thought them a perfect match. The couple had a lot in common – education, wealth and a love for conservative Islam. They were married over the phone; soon after Khan moved to America. But his new wife was a more fiery character than he wished. “She was so pumped up about jihad,” he said.

Six months into the marriage, Siddiqui demanded the newlyweds move to Bosnia. Khan refused, and grew annoyed at her devotion to activist causes. During a furious argument one night, he told me, he flung a milk bottle at his wife that split her lip.

After 9/11 Aafia insisted on returning to Pakistan, telling her husband that the US government was forcibly converting Muslim children to Christianity. Later that winter she pressed him to go on “jihad” to Afghanistan, where she had arranged for them to work in a hospital in Zabul province. Khan refused, sparking a vicious row. “She went hysterical, beating her hands on my chest, asking for divorce,” he recalled.

After Siddiqui disappeared in March 2003, Khan started to worry for his children – he had never seen his youngest son, Suleman. But he was reassured that they were still in Pakistan through three sources. He hired people to watch her house and they reported her comings and goings. His family was also briefed by ISI officials who said they were following her movements, he said. (Khan named an ISI brigadier whom I later contacted; he declined to speak).

Most strikingly, Khan claimed to have seen his ex-wife with his own eyes. In April 2003, he said, the ISI asked him to identify his ex-wife as she got off a flight from Islamabad, accompanied by her son. Two years later he spotted her again in a Karachi traffic jam. But he never went public with the information. “I wanted to protect her, for the sake of my children,” he said.

At trial, Siddiqui’s behaviour was remarkable. In particular, she demanded that the jury be genetically tested to ensure that they were not “Zionists” or “Israelis”.

On her conviction, Aafia Siddiqui shouted out:

“This is a verdict coming from Israel, not America.”

You can be certain that Yvonne Ridley and Cageprisoners will now go into overdrive. Siddiqui will be portrayed as a martyr and a heroine, not the extremist and terrorist that she is.

That tells you all you need to know about this organisation. They are Lord Haw Haws, posing as human rights campaigners.