In 2008 the government appointed Sabiha Iqbal, a member of the Socialist Workers Party, to a Muslim youth advisory panel.

Where is she now? Organising this week’s pro-Hamas events at the University of Bradford: 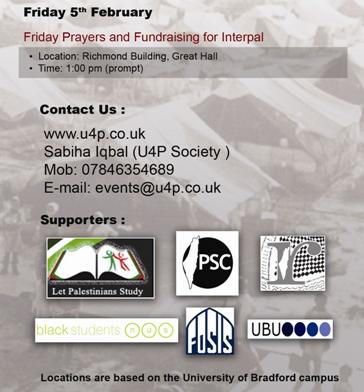 As you can see above, a fundraiser for Interpal will be held on Friday. If you want to help Hamas, Interpal, banned in the USA, Canada and Australia, is an excellent choice.

This is the poster for the event celebrating the twinning of the University of Bradford Students’ Union with the Islamic University of Gaza, a Hamas stronghold. 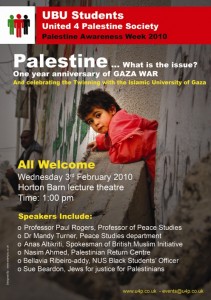 Veracity is not the strongest suit of one of the speakers, Nasim Ahmed. When the pro-Hamas Palestinian Return Centre (PRC) invited Hungarian neo-fascist Krisztina Morvai to one of its London conferences last autumn, the PRC researcher chose outright denial:

The ‘Nothing British About the BNP’ group challenged the Liberal Democrat peer over the planned participation of Kristina Morvai, leader of the nationalist Jobbik party in the European Parliament.
But Nasim Ahmed, researcher for the Palestinian Return Centre, denied that Mrs Morvai was “among invited guests” and said it deplored her “extremist” party.
…
Mrs Morvai, whose Jobbik party was addressed last year by BNP leader Nick Griffin, was reported by Ha’aretz to have once said: “I would be glad if the so-called proud Hungarian Jews would go back to playing with their tiny little circumcised tail rather than vilifying me.”

But Mr Ahmed maintained: “We have sent a number of press releases with a list of our speakers and Christina is not among them. It appears there is a unified effort to sully this event.”

Unfortunately for Mr Ahmed, two weeks later all his bluffing was undone when a front group for the PRC, which is based in its London office, confirmed that Morvai was invited:

The conference is promoted by the European Campaign to End the Siege of Gaza. A spokesman for the campaign confirmed that Morvai’s invitation had been withdrawn following protests. “We did not want to get into trouble, so we decided to exclude her,” he said. “We want the conference to be about raising awareness about Palestine.”

Never mind. It doesn’t look as if the Hamas supporters of the PRC will be in any “trouble” in Bradford. Rather, it seems they will be among fellows and friends.

Why not run this inspirational video at the twinning event for the benefit of the “peace studies” staff and students. It’s Nizar Rayyan, a senior Hamas leader killed in the Gaza war who taught Islamic law at the Islamic University.

After all, Rayyan was very true to the Hamas cause:

There was no flexibility with Rayyan. This is what he said when I asked him if he could envision a 50-year hudna (or cease-fire) with Israel: “The only reason to have a hudna is to prepare yourself for the final battle. We don’t need 50 years to prepare ourselves for the final battle with Israel.” There is no chance, he said, that true Islam would ever allow a Jewish state to survive in the Muslim Middle East. “Israel is an impossibility. It is an offense against God.”

I asked him if he believed, as some Hamas theologians do (and certainly as many Hezbollah leaders do) that Jews are the “sons of pigs and apes.” He gave me an interesting answer that reflects a myopic reading of the Koran. “Allah changed disobedient Jews into apes and pigs, it is true, but he specifically said these apes and pigs did not have the ability to reproduce. So it is not literally true that Jews today are descended from pigs and apes, but it is true that some of the ancestors of Jews were transformed into pigs and apes, and it is true that Allah continually makes the Jews pay for their crimes in many different ways. They are a cursed people.”

What are our crimes? I asked Rayyan. “You are murderers of the prophets and you have closed your ears to the Messenger of Allah,” he said. “Jews tried to kill the Prophet, peace be unto him. All throughout history, you have stood in opposition to the word of God.”