This has appeared on the website of the Leeds branch of the Palestine Solidarity Campaign: 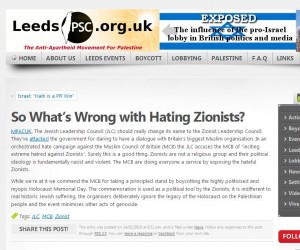 This is the text:

So What’s Wrong with Hating Zionists?

MPACUK. The Jewish Leadership Council (JLC) should really change its name to the Zionist Leadership Council. They’ve attacked the government for daring to have a dialogue with Britain’s biggest Muslim organisation. In an orchestrated hate campaign against the Muslim Council of Britain (MCB) the JLC accuses the MCB of “inciting extreme hatred against Zionists”. Surely this is a good thing. Zionists are not a religious group and their political ideology is fundamentally racist and violent. The MCB are doing everyone a service by exposing the hateful Zionists.

While we’re at it we commend the MCB for taking a principled stand by boycotting the highly politicised and myopic Holocaust Memorial Day. The commemoration is used as a political tool by the Zionists, it is indifferent to real historic Jewish suffering, the organisers deliberately ignore the legacy of the Holocaust on the Palestinian people and the event minimises other acts of genocide.

The source is MPACUK, which knows a thing or two about hatred. Its leader, Asghar Bukhari, has been exposed as a fan of Holocaust denier David Irving:

Asghar Bukhari, a founder member of the Muslim Public Affairs Committee (MPAC), which describes itself as Britain’s largest Muslim civil rights group, sent money to Irving and urged Islamic websites to ask visitors to make donations to his fighting fund.

Bukhari contacted the discredited historian, sentenced this year to three years in an Austrian prison for Holocaust denial, after reading his website. He headed his mail to Irving with a quotation attributed to the philosopher John Locke: ‘All that is needed for evil to triumph is for good people to stand idle.’

In one email Bukhari tells Irving: ‘You may feel like you are on your own but rest assured many people are with you in your fight for the Truth.’ Bukhari pledges to make a donation of £60 to Irving’s fighting fund and says that he has asked ‘a few of my colleagues to send some in too’. He also offers to send Irving a book, They Dare to Speak Out, by Paul Findley, a former US Senator, who has attacked his country’s close relationship with Israel. Bukhari says Findley ‘has suffered like you in trying to expose certain falsehoods perpetrated by the Jews’.

In a follow-up letter, Bukhari writes: ‘Here is the cheque I promised. Good luck, if there is any other way I can help please don’t hestitate to call me. I have also asked many Muslim websites to create links to your own and ask for donations.’

What’s next? Free jackboots and a natty armband if you join Leeds PSC?