This is Labour Councillor Terry Kelly, who represents Ward 4 in Paisley North West. 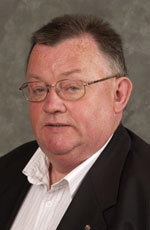 He says he was the election agent of Wendy Alexander, the former leader of the Labour Party in Scotland, at the last two elections.

Yesterday and today he has visited this blog to share his wisdom. In case you missed them, here are some of the pearls he left us, with such disarming decorum:

***
BassKey,
The Scottish Labour party support me 100%; anonymous cowards have been running to the papers and the Standards Commission with trumped up charges about me for years; they all failed and so will you.

Vildechaye,
Its clear you haven’t read my blog; I stand shoulder to shoulder with suffering people the world over. I don’t care what clour or credd they are I am a humanitarian, internationalist socialist; as we already know you glory in blood and genocide.

Also on the same channel (Press TV) reports were shown from Cairo where Egypt had stopped the Viva Palestina aid convoy heading for beleaguered Gaza; thousands of volunteers were there from all over the world and they were carrying nothing more dangerous than medicine and babies nappies. The convoy workers who were interviewed were quite inspirational; among them were Rabbis from Britain; France; America and Israel itself all demanding that relief be allowed in to Gaza; this of course gives the lie to those who immediately shout anti Semite at anyone who is critical of Israel; there were too many Israeli flags on view to allow that jibe to stand. One very distinguished and ancient looking old Rabbi from Manchester with his black hat and long beard was asked what he hoped to achieve and he said “to bring relief to the suffering and to show the world that Zionism is not Judaism and Judaism is not Zionism; Zionism is an affront to Judaism” hugely humble and uplifting. [here]

I would also like to offer best wishes for another decade to the Cuban revolution and it’s leaders including El Commandante himself Fidel Castro 94 years would be a good innings for one of history’s true giants; will Obama be the man to see the light and get round the table? Let’s hope so; to put Cuba into perspective perhaps Obama should consider the fact that America kills more illegal immigrants from Capitalist Mexico in a year than died during the existence of the Berlin Wall and also consider why America celebrates people defecting from Communist Cuba while still shooting dead those Capitalist Mexican illegal’s; it’s the American Way ‘YURP’ and it’s a strange world. [here]

Don’t buy Israeli goods; don’t have dealings with Israel; don’t visit the place; ban sporting contacts with them; shun them for the vile racists they are; force them through an economic blockade to do the decent thing. Force them to act as they once did; when their treatment under the Nazis won them the respect and affection of most of the world; [emphasis added] many people like me remain livid at the Behaviour of the Israeli State; behaviour that has made many of us move from being massively sympathetic to the suffering of the Jews to being livid at the way they continue to treat the Palestinians. [here]