A Tory Government wins an election. It appoints as a ‘community advisor’, a young man who spent a number of years active in Stop the Islamisation of Europe, of whose student wing he was ultimately president. He left that post a couple of years ago.

This young man has written and campaigned widely, in his role as President of Student SIOE. A quick google search discloses that he campaigned for a boycott of Muslim-run businesses. He also wrote an article defending the British National Party, arguing that it was unfairly maligned, was an opponent of Combat 18’s violence, and “the organisation works to advance the future of our White brothers by engaging in political work”. Not only that: he also campaigned actively against the National Union of Students’ “No Platform” policy for the BNP, arguing that it was unfair to label White Power politics “extremist”.

Furthermore, the Tory adviser also appears to have defended an arrested Blood and Honour hatemonger, claiming that he was ‘just another White Man – it could have been any of us’. When neo Nazi bombers were captured, our Tory adviser put out a statement demanding that the Government “accept at least the existence of a link between the attacks and immigration policy”.

During his presidency of Student SIOE, this young Tory organised conferences at which the likes of Nick Griffin, Mark Collett and Andrew Brons all spoke, alongside a number of even more outspoken neo Nazis.

All this comes to light within days of the appointment of this young Tory adviser. Questions are asked – didn’t the Tories know about any of this, before they made the appointment? Was this adviser perhaps appointed because of his political views, rather than despite them. The charge is led by the liberal papers: the Guardian, the Indie. This, editorials trumpet, is all the proof we need about the true nature of Cameron’s Tories. Their liberalism is exposed as a charade.

Of course, something like this could never happen. The Tories sack their frontbenchers for making racist jokes, these days.

Compare and contrast with the case of Wakkas Khan, appointed by John Denham MP, the Secretary of State for Communities and Local Government. Read about his activism and political positions, and ask yourself: in what way is he different from our hypothetical Tory advisor with a background in SIOE?

Then read this remarkable article by the Guardian’s Religious Affairs Correspondent, Riazat Butt:

But such protestations of innocence will butter no parsnips with his detractors who have decided that Fosis + HT defender = extremist. That CLG should have opted for Khan, a middle-class professional from an immigrant background with an interest in activism, is not unreasonable.
…
Too much is being made of his Fosis past and not enough questions are being asked about why the CLG needs to consult people of faith at all. Terry Sanderson has dismissed the panel as a “pointless talking shop”. If that’s all it is, then nobody should lose any sleep.

I’m sorry – too much is being made of his FOSIS past?

If the Tories appointed a man with extensive and outspoken involvement in SIOE, would Riazat Butt write an article urging us not to make too much fuss of his ‘past’, and stressing the fact that he was now a middle class professional – as if neo Nazis or extreme Islamists don’t routinely come from precisely those backgrounds?

It appears Denham’s department doesn’t give a damn:

“The Department for Communities refused to comment on whether officials knew about Mr Khan’s history before appointing him.”

Even worse, consider this comment that was posted at the end of the Wakkas Khan article, by the Press Office of the Department for Communities and Local Government: 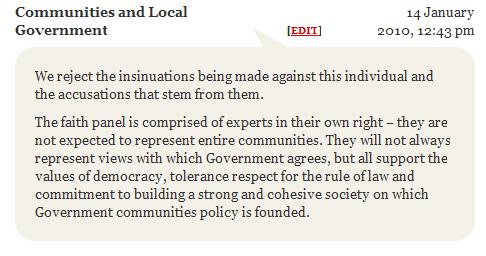 First of all, these were not ‘insinuations’. They were sourced reproductions of articles and policy positions that Wakkas Khan promoted. Secondly, support for Hizb ut Tahrir, and promotion of jihadist speakers is NOT reconcillable with “the values of democracy, tolerance respect for the rule of law and commitment to building a strong and cohesive society”. They are its polar opposite.

There is a part of the Left, which is also now at the heart of the Labour Party, which applies double standards when it comes to vicious and dangerous extremist politics. They correctly identify the threat to our society represented by the neo Nazi far Right. However, they regard those involved in Islamist far Right politics as their friends and allies.

John Denham – a graduate of War on Want, Oxfam and Christian Aid – is at the core of that worldview.