The government and the Muslim Council of Britain (MCB) are talking again:

“The Muslim Council of Britain has made a commitment to Government to examine their internal processes and ensure that the personal actions of all members, including senior leaders, remain true to the organisation’s agreed policies, avoiding a repeat of the issues which arose after one member signed the Istanbul Declaration.

“The MCB has stated its categorical opposition to attacks on British defence interests and confirmed its unwavering support for British troops across the world. It has also made clear that it stands firmly against Anti-Semitism and other forms of racism.

“The significance of these actions on the part of the MCB has led to the Government lifting the suspension of its formal relationship with that organisation. The MCB will now contribute to ongoing dialogue with Government as one amongst a wide range of Muslim organisations.

“We will closely monitor how the internal processes progress over the coming months.”

So, what about MCB deputy secretary general Daud Abdullah and the pro-Hamas Istanbul declaration (pdf)? His signature of that document at a meeting of extremist clerics and members of Hamas prompted the government to sever ties with the MCB, above all because the declaration called for attacks on foreign navies on any Gaza arms interdiction mission when the Royal Navy was being publicly considered for just such a role.

“In light of the MCBs letter we do not consider this to be an MCB issue. They have made clear to us that Daud Abdullah signed the statement in question in a personal capacity.

“We still have concerns about the uncertainty of Daud Abdullah’s personal position on this issue. Until he is able to provide the clarification that we have always been seeking we will not be engaging with him.

Hmm, do you think a prominent Tory caught signing a racist declaration that advocates violence would be let off by the party or the country on “personal capacity” grounds?

Whilst MCB is committed to faithfully represent the views of its affiliates on the Palestinian question, it has always stood, and continue to stand, firmly against any forms of Anti-Semitism or indeed any other forms of racism.

Is this supposed to be some kind of joke? Recall that last month the Quilliam Foundation and British Muslims for Secular Democracy both called on Green Lane Mosque in Birmingham to disinvite two virulently antisemitic preachers. What did the MCB do? It published the mosque’s ridiculous defence of the indefensible and passed no comment of its own.

This is no surprise at all. Just consider some of the speakers who have appeared over the past year at the East London Mosque and London Muslim Centre, whose chairman is none other than Muhammad Abdul Bari, the secretary general of the MCB.

Daud Abdullah is one of them. In the house journal of the pro-Hamas Palestinian Return Centre, where he is a “senior researcher”, he claimed that Israel doesn’t control just the US, but the UN too:

Still, the incumbent US administration claims that the instigator of this war [Ariel Sharon] is a ‘man of peace’ and should be allowed go about his business unimpeded. And, for whatever reasons, the UN has endorsed this line of reasoning. By so doing it has allowed itself to be hijacked by the messianic extremists who formulate Israeli national policy and enforce it through the US State Department.

This is from a speech at Al Quds Day, the annual Israel hatred march organised by the Islamic Human Rights Commission. According to Abdullah, Israel is using tunnelling and chemicals to destroy the third holiest site in Islam:

Many people thought, 100 years ago, that there will be no Zionist state in Palestine. They doubted it, but it became a reality. So don’t you doubt that masjid al Aqsa [the al Aqsa mosque in Jerusalem] cannot be destroyed. Don’t you doubt it. There is ample evidence that there is excavation beneath al Quds, that there are chemicals in the foundations of our masjid al Aqsa, which will lead to its collapse, and you should not doubt it.

Abdullah likes beating Israel with the Holocaust stick too:

Malaysian preacher Hussein Ye has quite a taste for demonisation:

“Because the Jews, they have gone so far against Allah’s commands. They like to do a lot of things that are very extreme. The most extremist nation in this world is the Jews. So if they used “extremists”, it doesn’t apply to Muslims. It applies to the Jews. They are the extremists in the world.
…
If they want to kill, they kill, because they believe that they are the chosen people. They are children of God. The blood that flows in the body of the Jew is the blood of God. It is holy. And the blood that is not Jewish, they are all like animals, you can kill them and they don’t feel that it is a sin.”

Ye was toured around the UK by Abdur Raheem-Green, a British convert. The scales fell from Green’s hitherto Zionist-controlled eyes in 1997:

I realised that popular opinion in the West was totally hostage to the Zionist-controlled media. The question of Palestine was one among these. My conversation with Palestinians revealed as to how the West had believed in myths about Israel. First among them was that the Jews had the right to return to their original homeland in Israel. Secondly they conveniently described themselves Semitic while the fact was that most Jews of the world were Slavs who had later converted to Judaism. Thirdly Israel’s economic miracle was theorised to create the economic and scientific myth.

Ten years on, he was recommending Gilad Atzmon.

Azzam “Kaboom” Tamimi is also welcome at the East London Mosque. He thinks Jews must drop Zionism to be fully human:

Zionist Jews must ask themselves, do they really think they can get away with such racist ideology and with their constant fabrication of lies in order to justify it? Until when will the world be able to put up with their arrogance and aggression? If they want to be as human as anybody else, Jews must wake up before it is too late. Israel is their number one liability and Zionism is no honorable cause for any respectable human being.

Hamas supporter Haitham al Haddad thinks Israel should be annihilated. Though perhaps more Jews will realise soon enough that they are being tricked and used by the Jesuits:

My proposed solution for the Israelis is to leave Palestine and to go back to their own countries to live in peace. If they want to live in peace, in real peace, they should leave Palestine and leave it for the Palestinians and those Jews who would like to live in Palestine, but under the Palestinian government, not under the Israeli government.
…
Many Jews believe that no, they should not live in a separate state in Palestine, and they should not establish the Temple until the antichrist come. So the antichrist should come back first, and then the Jews can have their own state, not the other way around. Many Jews believe that they were fooled by the Jesuits, many of the Jesuits, that they should establish the Temple first, in order for the antichrist to come back. Have you noticed the difference, OK, this is a major difference.

All of these Polish Jews which Hitler was supposedly trying to exterminate, that’s another point, by the way, Hitler never intended to mass-destroy the Jews. There are a number of books out on this written by Christians, you should read them. The Hoax of the Holocaust, I advise you to read this book and write this down, the Hoax of the Holocaust, a very good book. All of this is false propaganda and I know it sounds so far-fetched, but read it. The evidences [sic] are very strong. And they’re talking about newspaper articles, clippings, everything and look up yourself what Hitler really wanted to do. We’re not defending Hitler, by the way, but the Jews, the way that they portray him, also is not correct.

In a dismissive and unconvincing piece here, Yasir Qadhi blames a website for his Holocaust denial:

In the summer of 1999, someone had forwarded me a website of a group that called itself the ‘Institute for Historical Review’. At the time, I found the articles on it quite fascinating; the pseudo-scientific style in which they wrote gave the impression that they were a serious academic research body. It was only later, after more research, that I realized that they were a front for a group of actual anti-Semites, and were the leading Holocaust-denial organization in the world.

The website of the Institute for Historical Review was overtly hateful when Qadhi was reading it, as you can see in the web archive here. 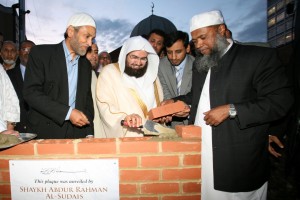 He takes a very dim view of Jews:

Read the history to know that yesterday’s Jews are evil predecessors and today’s Jews are worse successors. They an ingrate people, they altered God’s words, worshipped calf, killed Messengers and denied their Messages. They are exiled people and the worst of mankind. Allaah cursed them and cast His wrath upon them. He turned some of them to monkeys and pigs and worshippers of creatures. They are worst in position and are astray from the right path.

When Sudais’s visit was criticised, an unnamed director of the East London Mosque brushed it all off as “Islamophobia”:

“These are some of the old reports by Islamophobes. He is very popular. He’s not just coming to our mosque, he is also visiting major mosques around the country.”

Finally, the East London Mosque’s imam and khatib, Abdul Qayum, is a signatory of the Istanbul declaration, like Daud Abdullah. Last year he took Muslims who asked why Hamas fought Israel to task in a sermon, saying these Muslims were being fooled by propaganda from Israel, which was waging war on the Palestinan people, not Hamas.

Some people are making wrong comments. They don’t know the facts, what is happening, why all this happening? Some people are saying “What is the necessity of Hamas and fighting Israel? They should make compromise”.

This kind of wrong comments. First of all, many people are, they don’t know the real fact, because the media propaganda in the beginning. In the last few days, little bit of, we can see, good information is coming. But before it was very biased. So it was Israel’s only propaganda war, it was Hamas is the main problem. They have, as if they want to say, they have no problem with the normal Palestinian, the only problem is with Hamas. Let us deal with Hamas. This was their tool of propaganda.

Will Abdul Bari “stand firmly against Anti-Semitism” in his mosque by driving out hate preachers? Will other MCB affiliates do the same?

Meanwhile the government is likely to continue to “closely monitor” events, as it promises.

That is, it will pretend not to see what is happening right in front of all our eyes.