In these godless times, it is difficult to persuade people to convert from one religion that they don’t really believe in to another one which isn’t particularly convincing either.

Why convert to lapsed Catholicism?

Well, here’s a positive reason to become a Christian. You can get a cool tattoo of a sad Jesus. 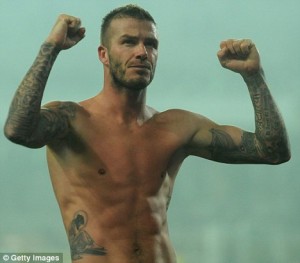 The Mail on Sunday has the story:

The superstar footballer revealed a new black and white tattoo of The Man Of Sorrows by artist Matthew R. Brooks as he celebrated AC Milan’s 3-0 victory over Juventus at the Olympic Stadium in Turin.

It’s the fourth image depicting Christian iconography that Beckham, 34, has had etched into his body – adding what can only be described as a multi-faith collection.

However, in his first biography My World, David revealed he had a strong link to Judaism.

He said: ‘I’ve probably had more contact with Judaism than with any other religion.

‘I used to wear the traditional Jewish skullcaps when I was younger, and I also went along to some Jewish weddings with my grandfather.’

On December last year he wore a blue skullcap to the funeral of his grandfather, Joe West, in honour of his Jewish roots.

He also has a matching tattoo written in Hebrew, with his wife Victoria, using an inscription usually found on Jewish wedding rings: ‘I am my beloved’s, my beloved is mine’.