[T]here remain nominal socialists who defend the mass murder and repression of the regime in Iran. Respect MP George Galloway, Andy Newman (Socialist Unity blog and Respect member) and groups like the Stalinist CPGB-ML have all defended the “mature democracy” of the Islamic Republic (Newman – www.socialistunity.com/?p=5051) and poured scorn on the mass movement as an attempt at some sort of colour revolution. Such claims have clearly been disproved by what is happening on the streets and the slogans taken up by the movement. Newman has been particularly idiotic, opting to ignore the murder of thousands of trade unionists, socialists, feminists and LGBT people under the clerical regime and instead defending the miserly welfare provisions that exist in Iran.

Defenders of the regime see it as anti-imperialist, forgetting that the clerics have made deals with the imperialists before and will no doubt do so again, if they think that will maintain their rule.

And here’s the latest reality check for Andy Newman and other “leftists” who are willing to cut the wretched Tehran regime miles of slack because of its alleged sympathy and assistance for economically-struggling Iranians. Press TV reports:

The ‘Economic Reform Plan’ won an approval from the 243-seated Parliament, with 134 lawmakers allowing the government to establish a reform subsidy organization to enforce the plan.

The Supreme Iranian Audit Court, a state body charged with supervising “financial operations and activities” of organizations which benefit from the state budget, will monitor the organization and submit reports on its performance twice a year.

If approved by the supervisory body, the Guardian Council, the legislation will result in the distribution of a portion of the recovered revenue among low income groups.

President Ahmadinejad believes his government will save up to 30 percent of its annual budget by cutting back on subsidies on gasoline and other refined products, natural gas, electricity, water, food, health and education.

Now the bit about distributing some of the recovered revenue among low income groups look like a cover for what is in effect a massive cutback in the subsidies that help the majority of Iranian families simply to survive. Clearly– what with huge outlays for nuclear development, the Revolutionary Guard, Hezbollah, Hamas and George Galloway’s Press TV salary, on top of the decline in oil prices– the Islamic Republic’s finances are stretched pretty tightly.

You may remember what happened in 2007, when the regime reduced the subsidy on gasoline and introduced rationing. 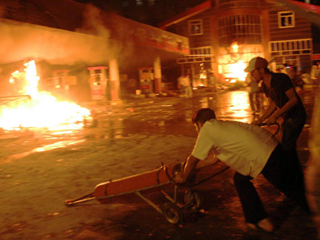 [E]nraged citizens throughout the country revolted by burning gas stations, looting government-owned businesses and rioting. Senior government officials, initially tried to play down the riots, but later had to admit to attacks on dozens of gas stations, government buildings, government banks, police vehicles, mass transit buses and chain stores. The chief of gas stations of Iran told the state-run media that nearly 30 percent of all gas stations in the country were destroyed or severely damaged. In addition to the capital, Tehran, angry people took to the streets in Arak, the holy city of Mashhad, Ilam, Shiraz, Yasouj and Ahmadinejad’s hometown, Garmsar. Other provinces including Azerbaijan, Mazandaran, Khuzistan, Ardebil, Hamedan and Isfahan were scenes of protests and clashes with the police. In many parts of Tehran, according to news agencies, angry youths pelted police with stones and chanted: “Guns, tanks, fireworks, Ahmadinejad must be killed.”

Add cuts in basic subsidies to the rage already felt by millions of Iranians after the fraudulent election in June and the brutal repression since then, and the future of the regime looks even dimmer.