Viva Palestina’s latest convoy to Gaza has found some wonderful partners between Turkey and Jordan.

Turkey
In Turkey, Viva Palestina has teamed up with a Turkish Islamist charity, IHH, as reported here. IHH is very close to Hamas and has been banned by Israel for that reason.

Never mind, the alliance gives Viva Palestina access to Turkish politicians, including Numan Kurtulmuş, the head of the hard line Islamist Felicity Party. At a reception for convoy leaders he hosted in Ankara, he must have warmed Holocaust mocker George Galloway’s heart with this barb:

“Israel is continuously keeping the Holocaust on the international agenda. Well, what about Israeli actions in Gaza?”

Here is a lovely picture from the Turkish meetings. Kurtulmuş is the third from the right of the men seated at the table. On the left is Kevin Ovenden of the “Respect” party, sporting a “resistance” look. Next to Ovenden is Mohammed Sawalha, a fugitive Hamas commander who has also been named on IslamOnline as “manager of the political committee of the International Organization of the Brothers [i.e. the Muslim Brotherhood] in Britain”. 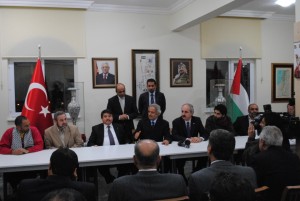 Syria
On to Syria. Guess who was waiting to greet the convoy?

Earlier on Sunday morning, the vehicles of the lifeline convoy were warmly received at the Bab Al-Salama border crossing in Aleppo by a number of Syrian officials, people and Palestinian leaders.

In a welcoming speech, Osama Hamdan, the representative of Hamas in Lebanon, said that this aid convoy is the fruit of efforts made by some free men and women from Europe in solidarity with the Palestinian Arab rights aiming at breaking the siege on Gaza.

In Damascus, where the dictatorship put convoy participants up in a posh hotel, it was time for the honour of an audience with Hamas leader Abu Marzook. He’s in the middle of the picture below, between Galloway on the left and Bulent Yildirim, the head of Turkish charity IHH, on the right. Sawalha also graced the meeting with his presence. 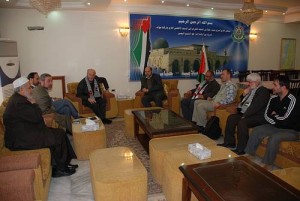 Jordan
In Amman, ever helpful Sawalha was on the spot again, according to the “Palestine Solidarity Campaign”, a backer of the convoy of love for Hamas:

“An hour, or maybe more, later we were allowed to move, and drove on to a reception at a trade union centre in Amman, given by the Jordanian Engineer’s Association, in association with opposition parties. George Galloway and Mohammed Sawalha, of the British Muslim Initiative, both there.”

Here’s a picture of Galloway with Hamam Said, the leader of the Muslim Brotherhood in Jordan and a pro-Hamas man who is considered hard core even by Brotherhood standards. Oh dear, they look a bit glum. 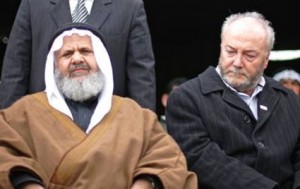 Worse was to come. When the convoy reached the Jordanian port of Aqaba, Egypt refused permission for it to sail. In Amman, Said and around 100 others, yes, the stunning total of 100, according to this report, did what any normal person would do when Egypt makes a decision: hold an angry demonstration and burn the Israeli flag. 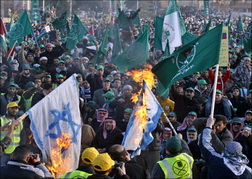 In Aqaba, Yildirim of IHH added to the belligerence with a call for the siege of Egyptian embassies, the filthy tools of the Israelis:

Israel is encouraged by the Egyptian stance, Yıldırım noted, adding “They are proposing the aid convoy to enter Gaza through Israel. In other words, they have sold Gaza to Israel.” 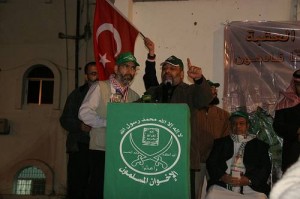 Yildirim thundering in Aqaba, behind the flag of the Islamic Action Front, the Jordanian branch of the Muslim Brotherhood

For their part, stranded humanitarian peace ‘n love activists in Aqaba did their bit against Satan:

To protest Israel Gaza convoy activists resorted to an unusual method. They gathered at the Jordanian coast of the Aqaba Gulf and hurled stones at the Israeli coast of the Gulf, an act resembling devil stoning during hajj ritual. The activists carried pro-Palestinian banners and shouted anti-Israel slogans. 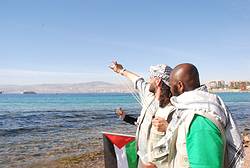 In the end Egypt agreed to allow the convoy to enter the country, but only through the Mediterranean port of Al Arish. So back on the road it was, to the Syrian port of Lattakia, where a Hamas camp kindly hosted the wayfarers.

The intrepid devil-stoning souls are now in Egypt, on their way to Gaza.

Here are some inspiring scenes from the convoy.

Would you too like to help Hamas? Now you know for sure, if you did not already, which registered British charity to support.

Here are their banking details:

I wonder if HSBC compliance officers have read this sanctions notice from the Bank of England?