These are the last days of the regime:

They compared Ayatollah Khamenei to Yazid, the Sunni caliph who killed Imam Hossein. Film clips showed demonstrators trying to tear down Ayatollah Khamenei’s portrait and trampling on a street sign bearing his name.

Watch out for that Yazid theme: you’ll see it again. It is a history-laden metaphor for Shi’a Muslims, and for this comparison to be made on Ashura is hugely significant.

Another witness told The Times how a middle-aged woman emerged from a cornered crowd and yelled at the police: “Aren’t you ashamed to beat and kill your own people?”

“To our surprise two of them admitted they were ashamed and were doing this only for money. The head of the squad then asked that we go home because he did not want to have to give the order to have us beaten,” the witness said.

Gangs of pro-government vigilantes increasingly appear to be taking the law into their own hands. On Saturday night a group broke up a meeting addressed by Mohammad Khatami, the reformist former president, and attacked nearby offices used by the family of Ayatollah Ruhollah Khomeini, the founder of the Islamic Republic. Leading members of the Khomeini family now support the opposition.

The opposition claims that the unrest is spreading across Iran, and to every social class. It senses victory, but activists fear a bloodbath first. “The security forces, especially the Revolutionary Guards, are prepared to fight until the end as they have nowhere to go,” one member said.

Here is a photograph of a member of the security forces, who has been captured and given a green scarf to wear. 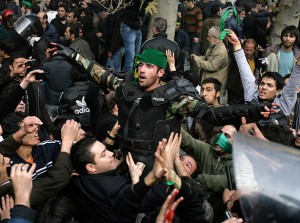 Potkin has a video of a group of security forces, cornered by protestors:

People have cornered these security forces. People ask them ‘why do you do this to your people?’ and the riot guards ask for forgiveness, ‘Bebakhshid’ they can be heard to say.

‘You are Yazid’s – the Khalif against whom the Ashura uprising took place -forces’, the woman shouts at them. One of the protesters then reassures them that they will not be beaten up, all they have to do is say Khameneii is a bastard. The woman can then be heard saying ‘All you can do is kill your people is it?’ and again they plead saying ‘Please We are not killers’.

May the people of Iran soon taste freedom.