1. Ashura in Iran So Far

AP has confirmed at least three people have been killed so far in Tehran. One of the dead is reported to have been a young girl shot in the back by the Baseej. Pro-regime lackey Ghanbar Naderi – he was fiercely pro-Khatami before – appeared on Aljazeera English this morning, his voice shaking he condemned today’s protesters saying they do not have a legal permit and are undermining the judiciary and should not use Ashura for their political purposes :)))))) 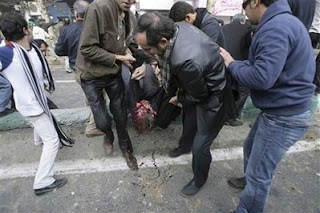 Blood, Smoke, Fire and Defiance on the most symbolic day of uprising against tyranny

[The BBC reports that Mousavi’s nephew has been killed]

2. Ashura, the Uprising Against Tyranny 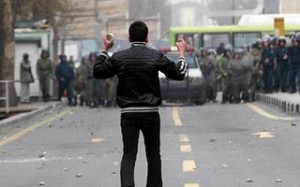 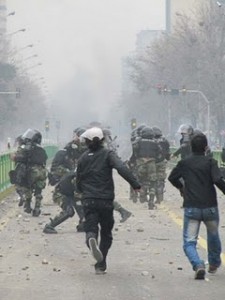 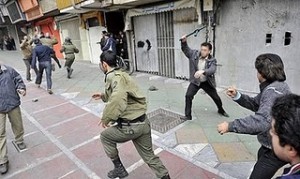 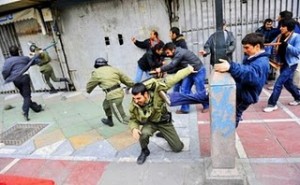 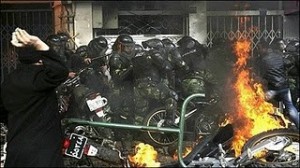 Self hating rich kids at SWP and Pro-Saddam Press TV lackey, George Galloway, himself the 5th richest MP in England will refer to these as ‘Affluent North Tehran Kids’ kicking the shit out of Baseej thugs :))

According to the Islamic Republic’s propaganda arm, Press TV:

The Iranian capital on Sunday witnessed sporadic anti-government protests on the anniversary of the Shia Muslim Ashura religious event, with security forces clashing with protesters.

Here is a video of the sort of thing that happens on these ‘sporadic’ protests. Watch a police van stopped, and the captured protestors freed.

How long before the edifice topples?

Gene adds: This has to be the photo of the day. If Iran’s rulers need a reason to tremble, they should look past the blood at the face of this woman. 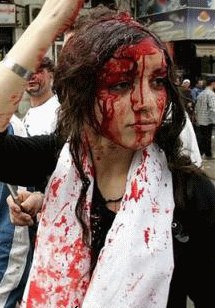 Update: The above photo apparently is not from Iran today, but from Lebanon in 2005 (scroll down), and is most likely of a self-inflicted wound to mark Ashura.

Not that there was any shortage of police- and Basij-inflicted wounds and deaths in Iran today.