Cross-posted from View from Outside Iran 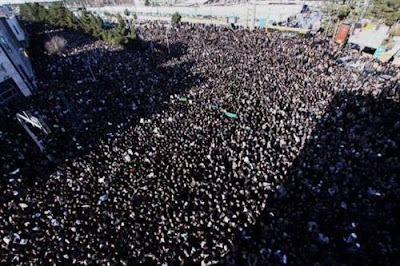 For the four years I spent in Iran, a dominant question from the “Western Street” was a variation of “Why don’t the world’s Muslims go to the streets to protest bombings?” The question presumes, of course, that the non-Muslim West knows all there is to know about the conversations, debates, and opinions of those in the mainly closed societies dominated by a Muslim population.

Meanwhile, I heard consistent condemnations of violence (of all types) from middle class and poor Iranians. Perhaps when you have seen the effects of war and terror on your own family and friends, you are much less likely to wish for its renewal.

On June 15, 3 million Iranians in Tehran went onto the streets because their hopes for peaceful and gradual reform of their government were so cruelly dashed by the blatantly fraudulent election results. Their individual courage was buoyed by the courage shown by others.

Yesterday in Qom, hundreds of thousands attended the funeral of Ali Montazeri, a grand ayatollah who had consistently spoken up for civil rights, the separation of state and religion, and against state-sponsored violence. They did this despite the risk of arrest and reprisals. Mourners went with knowledge of the brutal rapes of prisoners in Kharizak Prison, the torture and beatings and psychological anguish inflicted upon those in custody, and the random violence visited on demonstrators and passersby alike. They went with their eyes open and with hopes for freedom.

The only thing that can stop them in their quest for freedom now would be an attack on Iran from outside forces. The Iranian regime is doing everything it can to bait Israel and the West. It’s the schoolyard bully sticking out its tongue and begging for a punch in the gut. Wouldn’t it just be glorious to defend oneself rather than to be the aggressor? There is nothing the regime wants more than an outside attack. Restraint would do more to end their reign than anything else. Let’s finally allow the Iranian people decide their own future and allow them to play out their long struggle for real freedom and real civil rights.

MORE:
MideastYouth.com’s translation of Montazeri’s declaration of citizenship for Baha’is

My article at ex Ponto about the Iranian summer of opposition

One of the last interviews with Montazeri from Radio Zamaneh

Finally, a quote from an interview Montazeri did with Radio Zamaneh in 2008:

Montazeri: After all, no government is everlasting. “The state may endure heresy but it will not endure oppression.” [Quote from Mohammad]

Reporter: Apparently not, but it has endured so far.

Gene adds: You know the regime is in trouble when the pro-government Kayhan newspaper reports that there were “a maximum of about 5000” in the crowd at Montazeri’s funeral and that reformists “completely failed to create a popular gathering”.