Paul Craig Roberts was assistant secretary of the Treasury during Ronald Reagan’s administration and played a key role in creating the economic policy known as “Reaganomics.” He was an editor and columnist for the conservative Wall Street Journal.

He was also an enthusiastic supporter of the murderous Pinochet regime in Chile.

More recently Roberts has been an outspoken opponent of US foreign policy, harshly denouncing the Bush administration for its invasion of Iraq (he called for Bush’s impeachment to save constitutional democracy) and US support for Israel (he recently called President Obama a puppet of Israel).

Unsurprisingly Roberts is also a 9/11 truther.

His writings regularly appear on Alexander Cockburn’s “leftwing” Counterpunch and on the Stop the War Coalition website. He is one of the hinges joining the far Left to the far Right on the Internet.

Michelle Malkin is a somewhat more mainstream figure on the American Right. She is a frequent talking head on cable TV and contributes to the popular rightwing blog Hot Air as well as writing her own blog. She is a supporter of Israel, although I suspect much of that support is based on hatred for Israel’s enemies rather than any special love for the country itself.

Columns by both Roberts and Malkin appear on VDARE.com, a racist rightwing website dedicated largely to opposing large-scale nonwhite immigration to the US– based, among other things, on supposed differences in intelligence among the races. I think it’s safe to assume that the people behind VDARE.com would have been happy to keep Malkin’s dark-skinned Fillipino parents from immigrating the the US in 1970. VDARE.com features Roberts’s endorsement of its agenda.

So it was worth noting (as Little Green Footballs did) that the “Buzzworthy” section on Malkin’s blog recently included a link to an article by Roberts on VDARE.com entitled “For Palestinians, Every Day Is Kristallnacht”: 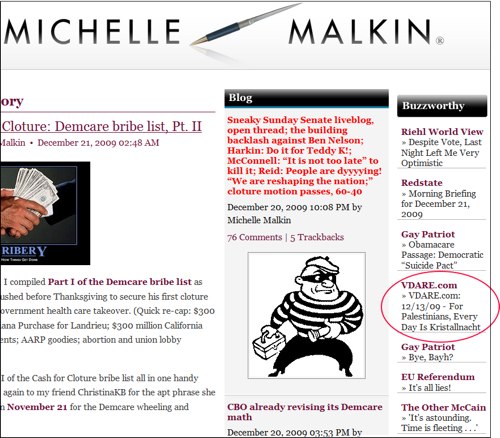 These attacks, together with the demolition of Palestinian homes, the uprooting of Palestinians’ olive groves, the innumerable checkpoints that prevent Palestinians from accessing schools, work, and medical care, the Israeli Wall that denies Palestinians access to the land stolen from them, and the isolation and blockade of the Gaza Ghetto, are part of the Israeli government’s policy of genocide for the Palestinians.

The Israel Lobby has such power over America that even former President Jimmy Carter, a good friend of Israel, is demonized for using the polite term–apartheid–for the genocide that has occurred over the decades during which American “Christian” preachers, together with bought-and-paid-for politicians, justified Israel’s policy of slow genocide for Palestine.

The US, “the world’s only superpower,” has no independent voice in Middle Eastern affairs. The real power rests in the hands of the settler thug, Avigdor Lieberman, Deputy Prime Minister of Israel and Minister of Foreign Affairs. This is the man who controls the Obama government’s Middle East policy. Lieberman forced the “all-powerful President of the US, Barack Obama,” to rescind his order to Israel to halt the illegal settler settlements on occupied Palestinian land. Obama was given the bird and submitted to his master.

Macho Americans who prance around as if they owned the world are nothing but the puppets of Israel. The US is not a country. It is a colony.

I don’t believe for a moment that this article reflected Malkin’s views, which I suspect are favorable to the Israeli Right. But at least for awhile, there was a prominent link to it on her website. Obviously the Buzzworthy feature is designed to create links automatically to selected websites.

But perhaps the process of selecting websites wasn’t selective enough. Something about the consequences of reclining with canines comes to mind.