An open letter to Viva Palestina!

Brothers and Sisters in the struggle for human rights and the crushing of apartheid!

When I discovered that you will be passing through Syria, my heart leapt with joy!

Nothing would make me happier than to give you some background on the “fortress of the remaining dignity of the Arabs” and its people who stand as one in solidarity behind “the last Arab ruler”, Dr. Bashar Al Assad.

It would be an honour for me to guide you on your way, and share with you all some secrets that aren’t in the guidebooks.

It looks as if you’ll be taking the main North–South route which takes you through Aleppo, Hama, Homs and Damascus and then on to Jordan.

Once you’ve passed through the checkpoint at Turkey, it’s pretty much plain sailing. And if you have some free time (and can get away from your “escorts”), it’s worth taking a drive to surrounding areas in the north of the country.

In the upper northeast of Syria lies the Kurdish town of Qamishle. Syria’s 1.7 million Kurds reside mainly in the northeast.

Kurds? After all Syria is officially named the Syrian Arab Republic.

So how does Syria treat this minority?

Roughly 300,000 of them are denied citizenship thus denying them the right to education, employment, property ownership, and even marriage.

Nor are they allowed to speak, write or print their own language and their culture cannot be expressed openly.

Odd, isn’t it? Mind you, as everybody knows the Zionist Entity is much much worse. Palestinians have no access to education, cannot work, purchase property or get married. It even bans Palestinians outright from speaking, reading and writing Arabic.

Oh wait. I may be wrong here….

Stateless Kurds who try to leave the country for work risk torture and imprisonment.

To be honest, it reminds me of a two-tier political system in which one group in a country is denied the rights which another enjoys. Though I seem to have forgotten its name. Ap… App… Ah! Apartheid! That’s it!

Also it’s worth noting that the Syrian government removed Kurds from along the country’s northern and northeastern borders, and replaced them with Arab settlers.

Oh dear. This is a bit awkward isn’t it? Apartheid? Settlers?
Aren’t we supposed to be against this sort of thing? Maybe it’s best if we ignore it, as it seems to complicate things.

Here are some other things we maybe should ignore.

I know! Let’s change the subject. Do you like football? They love football in Syria. You should try and attend a game if possible.

In March of 2004 disturbances erupted at a football game in Qamishlo (its Kurdish name) over rivalry between Kurdish and Arab teams. Scores of people, probably over a hundred, were killed by Syrian police using live ammunition to fire on unarmed crowds (see Kurdish agony – the forgotten massacre of Qamishlo). Violence on a smaller scale has continued to erupt in Qamishlo. 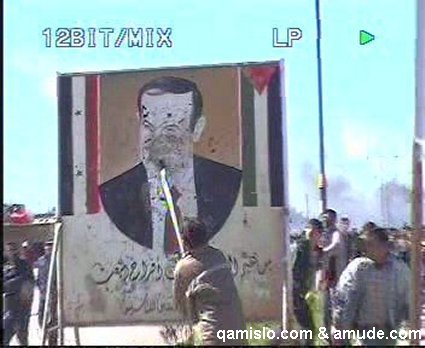 Here are photos of some of those killed by the Syrian security forces.

We’d better move on. This is making things difficult. We’re going to all this trouble to stand up against injustice and oppression and yet the Zionists may accuse us of turning a blind eye to much worse.

Ah! I know. Let’s go south. To Hama, you’ll be traveling through it. You will love it there.

It’s one of Syria’s most beautiful cities, famous for its water wheels sitting on the tree-lined Orontes River. Yet for such an old city strangely it looks so modern.

Passing through Homs, if you have a day off it’s worth traveling east to Palmyra, home of some of the world’s greatest historical sites.

It’s also home to a prison which carries Palmyra’s old name Tadmour. It’s rumoured that Lebanon’s abducted are imprisoned there.

Or they may be dead. Best not to think about it, it’s probably Zionist propaganda. Instead let’s go on to Damascus.

Twenty miles outside Damascus lies Saydnaya prison. Here, as you can see, conditions for prisoners are much better than those in Zionist Occupation prisons. Here prisoners have regular visits, human rights organisations have access and any accusation of ill treatment and torture is immediately dealt with. Or not.

When you get to Damascus, you will be pleasantly surprised by its openness and its citizens enjoy a level of freedom which is the envy of the world.

If you get a chance do try and speak to Tariq Biasi or Karim ‘Arabji.

From Damascus it’s a relatively short journey to the Jordanian border.

I hope you’ll have as wonderful a time in Syria as I did. It changed my life. I met so many wonderful people in Syria– Arab, Sunni, Shia, Druze, Kurd, Armenian, and Assyrian– all of whom deserve the very same freedoms and rights which we take for granted.

I am so overjoyed that you recognise that human rights are indivisible and must be applied to all. It’s great that you understand that selective indignation at abuses which fit a simple narrative of events– while ignoring the much worse crushing of human rights and people’s dignity because it doesn’t quite fit the script– is nothing other than the worst sort of cowardice and hypocrisy.

Keep fighting the good fight against oppression and apartheid in the Middle East wherever it may be.

It won’t be easy, there will be pressure on you to deny and ignore anything inconvenient and speaking out is not without consequence.

When you’re tempted to select the easy options of denial or rationalisation, please remember that we can speak out without fear of disappearing, or worse. Syrians can’t.

You’re their lifeline to the outside word, a lifeline which cuts through all the propaganda, lies and denial.

For that I salute your courage, your strength, your indefatigability.