Last night, Conway Hall in Holborn was the venue for a strange spectacle. A relatively unknown group, the Muslim Debate Initiative (MDI), had organised a panel debate on the motion Islamification of Britain: Reality or Myth? Most controversially, they had invited a member of the BNP to make the ‘Reality’ case. Outside, a half dozen members of Unite Against Fascism turned up but their chants were entirely deadened by Conway Hall’s double doors and, apart from one UAF member loudly barging in, I doubt that many people inside the hall were even aware or their presence.

The invited speakers ranged from the eccentric (Reverend Frank Gelli, Anglican Priest) to the repugnant (Jeffrey Marshall, central London organiser for the BNP) and every stage between the two; representatives of the British Humanist Association, the Christian People’s Alliance and the English Democrats all turned up, alongside Abdullah Al Andalusi of MDI, and trotted out prepared 10 minute speeches before entering into a panel debate and taking questions from the floor.

It is this last chap, the only Muslim on the panel, on whom I would like to focus here. Speaking second, straight after a particularly unconvincing performance from Marshall, Andalusi stated MDI’s goal for the evening. Never again, he announced with uncomfortably exaggerated rhetoric, could Muslims be accused of shutting down debate about Islam. Here was MDI hosting a member of the repulsive BNP and allowing him to express his odious views about Islam, hardly the actions of a group that threatens freedom of speech. Andalusi and MDI are not the first Muslims to volunteer to debate the far right, but these are noble sentiments for which they deserve credit.

Andalusi went further though. He also talked about how Shariah is a perfect system of life, better than Capitalism, Communism and other political systems, although this was immediately tempered by adding “but I don’t want to see Shariah here in the UK, I want it in the Muslim world”. This was Andalusi’s key point he made to contradict the BNP’s claims of Islamisation, that the Islamist revolution he’s working for would merely deny democracy to millions of people in Muslim majority countries, not to deny democracy to Brits. As Andalusi himself mentioned, this differs little from what Hizb ut-Tahrir are calling for.

On Facebook, Andalusi describes his political views as ‘Islamic – Caliphate’. He is also a member of the Facebook groups ‘We are not secularist’ and ‘Muslims Against Voting in Kufr Political Systems’ (although, as he is, at the same time, a member of pro and anti-EDL groups, this should be taken with a pinch of salt). 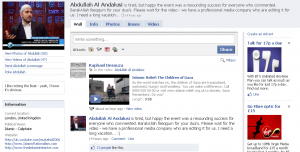 Until recently, Andalusi ran the blog Secularism Exposed which was subtitled ‘The naked truth of the intellectual falsehood of Secularism’. Shortly before last night’s event, this blog had its security settings ramped up and, alas, we can no longer read entries like ‘Can Muslims Participate in Democracy?’ and ‘Critique of Democracy’. 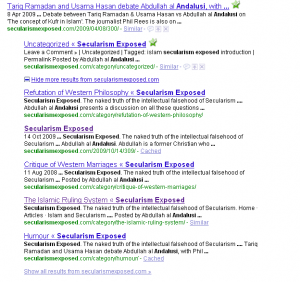 Fortunately there is a video of Andalusi which clearly sets out on his views on democracy. I would not suggest watching it all, not least because Andalusi is not a particularly good speaker, so skip forward to 15:40.

“The case with democracy is that it doesn’t work, it doesn’t represent the people, it never will, it’s based on some interests where no one is happy, no one has their interests fulfilled and that you have to fight with other people…”

Then, after 21:00 he really pins his Islamist colours to the mast. He talks about how the ruler “has no choice but to implement the policies that Islam mandates … and this is the reason why the Islamic system, Islamic state cannot be corrupted.” Not so much the moderate he tried to paint himself as last night. Whether Andalusi is a member of Hizb ut-Tahrir or not is irrelevant. On available evidence, he probably is not. What matters are the ideas he espouses – they are a non-violent strand of Islamism which shares much with how Hizb ut-Tahrir sees the world.

There is something more underhand going on, however, than the simple fact of MDI’s leading speaker being a proponent of the creation of an Islamist caliphate whilst trying to present himself to the media as a moderate anti-BNP Muslim voice. ‘Muslim Debate Initiative’ was not always so-named.

Back in the day (well, a few months ago when I first came across it) the ‘D’ in MDI stood for Dawah. Dawah in Arabic literally means “invitation” so this group, initially at least, conceived of itself as a platform for proselytisation. It is only recently that it decided to fly the colours of free speech and change the ‘D’ to stand for Debate. Just as Hizb ut-Tahrir (HuT), as its ideological bankruptcy became more and more evident, turned to creating front groups, so do HuT’s Islamist fellow travellers.

They know that, if they are upfront about the fact that they are organising events with the goal of spreading their ideology, then people will not turn up. Instead, MDI organised a controversial event which they knew a lot of Muslims would attend, then they made sure that it was their speaker, Andalusi, who was the only Muslim voice to speak on this topic. The dawah continues, just dressed up as debate.

There are plenty of Muslims out there sincerely challenging extremism of all stripes. Andalusi and MDI must not be allowed to present themselves as part of this building wave.