This is a crosspost by Faisal from The Spittoon 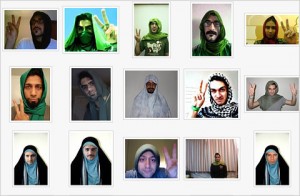 We are all Majid Tavakoli now

An email from an Iranian friend from IGHLRC:

Earlier this week, The Iranian authorities arrested Majid Tavakoli, a student leader, who spoke at an anti-government rally in Tehran University, marking the Student Day in Iran. To humiliate him, the authorities published a picture of him wearing women’s headscarf, an old practice by the government to prove to the public that the opposition leaders are “less than men”, lacking courage and bravery.

This time around though, The anti-government movement responded quickly by posting pictures of hundreds of men wearing headscarf.

The protesters have found a new way to show their solidarity with Mr. Tavakoli — by changing their profile pictures to show them wearing similar clothes. Take a look at the video that they have released, it is remarkable:

“It is ironic how headscarf, which was traditionally seen as a symbol of women’s oppression (who are forced to wear it in public in Iran), is now being used by men to show membership in a liberation movement. It is worth noting that it is a violation of law to cross-dress in Iran.”

The ongoing, spirited anti-government protests in Iran has been fearless, witty, creative and nothing short of inspiring. And when you see images like this, you know that the Iranian regime don’t have a snowball’s chance against the courage of the Iranian people.

Another friend puts it brilliantly:

“A band of close-minded, desperate, brittle thugs are facing intelligent, resourceful, flexible opposition. They’ll struggle increasingly to get their message across as each tactic they use is subverted, adopted or discounted by their foes. Every attempt to shame will become a badge of honour and respect. They’ve lost, it’s just that they haven’t realised it yet cos they still have all the oil & guns. They’re too stupid to realise that in an educated country, money & guns aren’t enough.”

UPDATE – Sabz in the comments says:

Send your “woman” photo in defense of Majid Tavakkoli

p.s. Tavakoli was tortured and sodomized in 2007 in Evin prison.