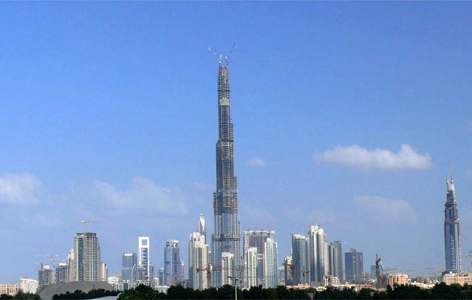 The strange creation known as Dubai may not be about to fulfill the vision in Shelley’s poem Ozymandias, but the recent debt crisis is a reminder that the place is built– figuratively as well as literally– on sand. In fact the building boom of recent years turned into something of a bust about a year ago.

As someone who recognizes that capitalism has some positive features, it’s hard for me to see Dubai as anything other than a compendium of capitalism’s worst features taken to the nth degree: extravagance for the sake of extravagance (e.g., an indoor ski slope), large-scale environmental damage, vastly unequal global distribution of resources and most tellingly the enormous gaps between a minority of privileged UAE nationals and Westerners on the one hand, and on the other hand a huge exploited army of mainly south Asian workers, many of whom live in squalid “collective labour accommodations.” 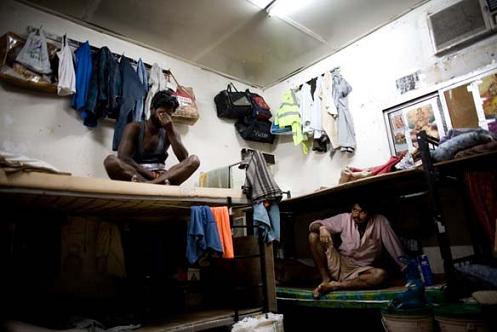 Dubai is a concentrated, exaggerated version of what is happening in many other parts of the world.

At the top, floating around in their black or white robes, are the locals with their oil money. Immaculate and pampered, they own everything. Outside the “free zones”, where the rules are looser, no one can start a business in the UAE without a partner from the emirates, who often does nothing apart from lending his name. No one can get a work permit without a local sponsor.

Under the locals come the western foreigners, the experts and advisers, making double the salaries they make back home, all tax free. Beneath them are the Arabs – Lebanese and Palestinians, Egyptians and Syrians. What unites these groups is a mixture of pretension and racism.

“Unrealistic things happen to your mind when you come here,” a Lebanese woman who frequently visits Dubai tells me as she drives her new black SUV. “Suddenly, you can make $5,000 [£2,800] a month. You can get credit so easy, you buy the car of your dreams, you shop and you think it’s a great bargain; when you go to dinner, you go to a hotel … nowhere else can you live like this.”

Down at the base of the pyramid are the labourers, waiters, hotel employees and unskilled workers from India, Pakistan, Sri Lanka, Ethiopia, the Philippines and beyond. They move deferentially around the huge malls, cafes, bars and restaurants, bowing down and calling people sir and madam. In the middle of the day, during the hottest hours, you can see them sleeping in public gardens under trees, or on the marble floors of the Dubai Mosque, on benches or pieces of cardboard on side streets. These are the victims of the racism that is not only flourishing in the UAE but is increasingly being exported to the rest of the Middle East. Sometimes it reminds you of the American south in the 1930s.

In 2007, while the boom was still at his height, ABC News did a revealing report on the gulf between the pampered few and the exploited many in Dubai.

Around the same time, Sunny Hundal wrote enthusiastically about Dubai in The Guardian, although he did acknowledge that “the political system still resembles more a monarchy than a democracy and political dissent is not easily tolerated.” Perhaps the latest events have caused a few more stars to fall from his eyes.