The first gig in a four city Bricup “Boycott Apartheid Israel” roadshow is scheduled for Friday in London. This is part of the lineup:

Kasrils is of course the uber – asajew whose name perennially crops up in CIF comments as in: “Well, Kasrils is a Jew and he says Israel is an apartheid state so who now dares deny it. “

There is a certain irony that Kasrils was criticized by the Goldstone Commission into the Bisho massacre for his irresponsibility in leading young ANC protesters to their deaths.

But it is Bongani Masuku whose inflammatory statements are currently before the South African Human Rights Council, on a complaint by the Jewish community that they constitute hate speech.

I wonder if Bricup in its academic redoubt quite realise what they are getting in Masuku. Perhaps it would be salutory for Masuku with his blood flecked spittle to come crashing through Bricup’s posturing veneer.

In early February Cosatu led an illegal Gaza protest march on a Jewish community centre in a suburb of Johannesburg where many Jews live. The march could have taken place outside the Israeli Embassy. Instead the choice was this community centre in the suburbs (which houses various Jewish charities, a museum, and the Board of Deputies in addition to the Zionist Federation). This blog of the event reflects how the Jewish community felt targeted.

Bearing the regulation Magen David/swastika banners the crowd then moved on, Kasrils with them, to a nearby Synagogue, where they burned an Israeli flag. This happens to be the Synagogue founded by my great grandparents and grandparents. It was a big part of my life and my relatives still worship there and live nearby. 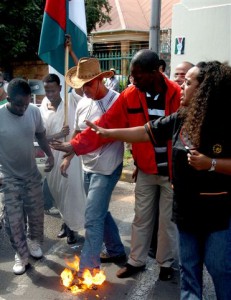 The message from Kasrils, was clear – Zionists are not wanted in South Africa. “It is reprehensible that we have Zionists here who support Israel” bellowed Kasrils.

Around this time, Masuku unleashed the first of a torrent of ominous statements sending the message that the majority of Jews in South Africa should no longer regard their presence there as secure. The targets would be anyone who supported Israel in the broadest terms. This was no discussion about the niceties of the 67 borders or the like, but was framed to include most of the 70,000 Jews in South Africa.

“I have no doubt that all those who support Israel are just as evil as the actions of Israel and am less concerned whether that is semitic or not, but am interested in the end of human suffering caused by Israel.

A humble reminder therefore, Israeli as an apartheid state deserves the fate of all its preceding fellows and friends.
…
none of those who tolerate Israeli apartheid and racism should ever imagine it [South Africa] to be their home.

(Oh, did I mention that not every one of the 70,000 have the sword of Damocles hanging over them? You will be relieved to hear that there are an Elect 310 who will be spared. These are the Jews who signed a letter condemning Israel’s conduct in Gaza.)

As Z-word, an unwilling party to this correspondence says, Masuku may well have provided us with the definitive reference work for understanding anti-Zionist discourse.

But, as Z –word continues, while it is impressive Masuku manages to pack all the standard tropes into a relatively economical word-count: comparisons between Israel and the Nazis and so forth, what is instructive is that an official of Cosatu thinks in this manner and uses his official work email to spread this kind of antisemitic bile.

COSATU has got members here even on this campus; we can make sure that for that side it will be hell.

There was more, much more, including a call by Masuku for vigilante action against SA Jewish families whose offspring serve in the Israeli army. 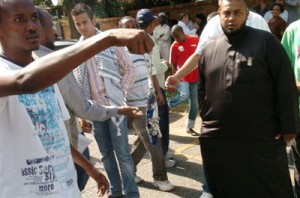 The ruling of the SA Human Rights Council is expected in a few week’s time. Whatever its findings, this observer of the Cosatu march sums up everything that is wrong and destructive about inviting Bongani Masuku into the UK and onto a platform here. Much as it might be gratifying to witness Bricup’s discomfiture at their unruly guest, the blogger is right:

“Perhaps the saddest thing about the recent pressure tactics placed on South African Jews is how it has reduced the space for dialogue within the community about the Israeli-Palestinian conflict. Moderate voices that supported the withdrawal from Gaza, and even future withdrawals from the West Bank, have been completely silenced. Whereas last year I found myself arguing with Rabbis about the importance of making compromises, this year I find myself alongside the rest of the community – ostracised and back-to-the-wall in an environment where all energy needs to be directed around supporting Israel’s right to exist. Targeting Jews is one fool-proof way of uniting all Zionists.”