One of the stranger manifestations of sectarianism in Northern Ireland is the identification of supporters of the IRA/Sinn Fein with Palestinian terrorist groups, and the reciprocal flying by Loyalists of the Israeli flag:

According to Gallagher, some of these paramilitary groups are expressing a belief that the British government should resort to a military response against violent extremists within the IRA, like the response of Sharon and the Israel Defense Forces to such acts as Palestinian suicide bombings. “Protestant sympathy for Israel is most likely based on an assumed commonality of interest in opposing ‘terrorism,'” Gallagher said.

Another interpretation of this connection, and one replete with religious elements, was explained to me by my American friend studying in Belfast, who said that some Protestants align with Israel because they, too, identify themselves as members of one of the Lost Tribes of Israel who continue to be persecuted — in this case, they believe, by Catholics.

But comparing the Catholic-Protestant conflict with the Palestinian-Israeli conflict gives rise to another, more obvious interpretation — one that most Israelis, Jews and Northern Ireland Protestants would surely be unhappy with. The ancestors of today’s Irish Protestants are seen by many to have been colonialists, foreigners who took Ireland in the name of the British royal crown. And so too, there are some who see many of today’s Jewish Israelis as descendants of colonialists: namely, the early Zionists who moved to what was then called Palestine in hopes of creating a Jewish state.

Gallagher points out that while the Israeli flag phenomenon is new on the streets of Protestant neighborhoods, many Irish Catholics have aligned themselves with Palestinians for decades. They have not only placed Palestinian flags alongside Republic of Ireland flags in countless Belfast neighborhoods, but in some of their famous building-sized murals they have also featured Gerry Adams with the likes of Yasser Arafat as well as Nelson Mandela. One famous mural even depicted an IRA affiliate standing next to a PLO affiliate with the overhead slogan “Two Nations, One Struggle.” Even today, if one visits the Northern Ireland Sinn Fein headquarters in West Belfast, Gerry Adams’ main office, one will find a large Palestinian flag hanging next to that of Ireland.

It is pretty clear, therefore, that the process of identifying with either Palestinian groups or Israel has very little to do with Jewish-Arab relations in the Middle East, and everything to do with the history of the British Isles. In effect, one sectarian conflict is being used as a metaphor for another. 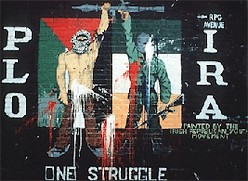 The Scottish TUC understands sectarianism well. Indeed, they love it so much, they’ve decided to encourage Celtic supporters to help them in promoting it in Scotland.

Celtic, a club which well understands the perils of sectarianism, is having none of it:

Celtic Football Club has opposed calls from a union body for its fans to wave Palestinian flags at Wednesday’s match with Israeli team Hapoel Tel Aviv.

The Scottish Trades Union Congress (STUC) has asked supporters to “show solidarity with suffering Palestinians” at the Europa League game in Glasgow.

In a statement, Celtic said it was “extremely concerned” at the request.

Hapoel Tel Aviv, a proudly progressive and anti-racist football club, would never consider – for example – encouraging its fans to turn up wearing the orange sash to the match.

You wouldn’t find its players pretending to play the Auld Orange Flute after scoring a goal. 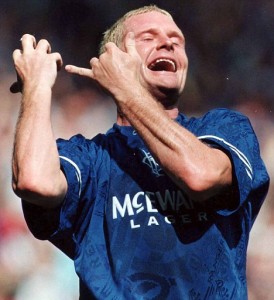 This is more their style: 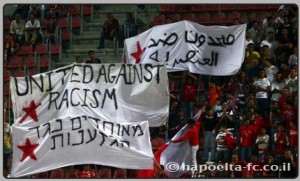 Do the STUC think Celtic fans are stupid? “C’mon Bhoys, show some solidarity with the oppressed Palestinians… youse are always greeting about oppression, they’re your kind of people… here’s a flag, and it’s got green and white in it…”

Football can bring people together, and politics can divide football fans, even those who support the same team, but there is nothing worse than politics hijacking other people’s events without being upfront about it.

If there is a Palestinian flag protest tomorrow night in the East End of the Glasgow, then any outrage afterwards – and there would be plenty – would be directed at Celtic fans, not the STUC who called for it.

Remember: this is what happens if you let extreme Left sectarians take control of the union movement.