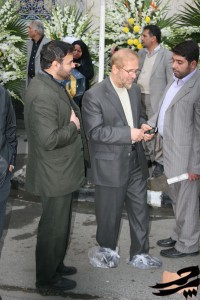 This man in the picture with plastic bags covering his feet is Mohammad Ali Ramin, Ahmadinejad’s pro-Nazi advisor with dubious contacts with neo-Nazi parties in Germany. The callous murder of the pregnant Egyptian mother, Marwa Al-Sherbini, in a German courtroom, in front of her husband and child, was committed by a Russian Nazi supporter of one of the parties Ramin is close to.

Ramin is believed to be the one who convinced Ahmadinejad the holocaust never happened. He is currently the deputy Minister for Press Affairs in the Guidance Ministry.

So why is Ramin wearing plastic bags on his feet? The picture is taken after he attended Kordan’s funeral ceremony. Kordan was the former Minister of Interior in Ahmadinejad’s cabinet who had faked his Oxford PHD and had a rape record prior to the 1979 revolution . Ramin’s shoes were stolen as he came out of the mosque. One can only imagine the kind of characters who attended Kordan’s ceremony!