The gang of fools known as the Scottish Palestine Solidarity Campaign, in unfortunate and baffling cooperation with the Scottish Trades Union Congress, is planning a protest when the HaPoel Tel Aviv soccer club plays Glasgow Celtic on Wednesday December 2.

Hapoel Tel Aviv was once owned by the Histadrut [trade union confederation], but it’s still considered the ultimate left-wing team in Israel, definitely by its fans. As for Maccabi Tel Aviv, they are associated with the capitalist bourgeoisie, not the Likud…

The Likud team is Beitar Jerusalem, the only Israeli soccer team which has never had an Arab or a Moslem player. Today, virtually every other team has at least one, and frequently a few Arab and Druze players. Hapoel Tel Aviv’s captain is an Arab, Walid Badir, and the captain of the under 21 national team is another Hapoel Tel Aviv minority player, Bibrus Natko, who is a Circassian. As you may know, there is also an Arab team in the top league – Bnai Sachnin, Arab-owned with a Jewish coach. There is a wonderful film made about them: ‘We too don’t have any other country.’ About half the players are Arabs from Sachnin and other Galilean towns, and the other half are Jews and internationals. This year they are one of the top four teams in the league.

Walid Badir (seen below celebrating a recent HaPoel victory over Celtic) is famous for scoring the goal that gave Israel a 1-1 tie against France in a 2005 World Cup qualifying match. 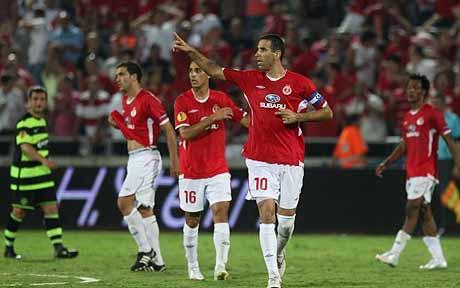 If it were the disgusting, deliberately Arab-free Beitar (the SPSC’s mirror image) that was playing in Glasgow, I’d be inclined to support a protest. But HaPoel Tel Aviv? A club with a leftwing tradition (HaPoel means “the worker”) and an Arab captain? A club which promotes– through its Mifalot project— mixed childrens’ soccer teams of “Jewish-Israelis, Arab-Israelis, Palestinians, Bedouins, Druze, Christians, Refugees, Ethiopian Immigrants, and Kibbutz children”?

Who is serious about peace and reconciliation between Jews and Arabs in the Middle East and who is interested only in continued conflict and hatred?

Update: Here’s a video about HaPoel’s mixed-team project. Try to ignore the song at the end.