Newsweek clearly wanted to make Sarah Palin look at bit of an idiot with its cover that some are calling sexist, but it looks to have had the reverse affect and is whipping up support for the Republican from Alaska who shoots stuff and is looking to run for president in 2012. 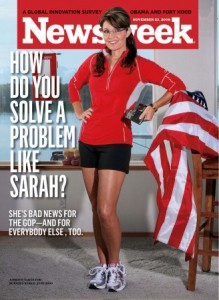 Newsweek apparently wants to get this unelectable photogenic woman elected and, oh yeah, help promote her new book ‘Going Rogue’ along the way. The book was the reason for the cover in the first place, which Newsweek is covering in the shape of two essays including one by Christopher Hitchens (who has already warned the liberal left that it might not be “entirely wise to patronize her”). The book is certainly going to be a best seller as Palin “sets the record straight”.

The funny thing it is a legitimate cover shot…just it was part of a photo shoot that Palin did for Runners World (yes this woman loves to run). Newsweek used it without that magazine’s permission (naughty). But the funniest thing is listening to the paper thin explanation by Newsweek editor Jon Meacham. This is genius. I want to meet the man who talks like this. He should do stand-up.

“We chose the most interesting image available to us to illustrate the theme of the cover, which is what we always try to do. We apply the same test to photographs of any public figure, male or female: does the image convey what we are saying? That is a gender-neutral standard.”

Did he say that with a straight face? Awesome. I mean come on. The most interesting image available? The Theme? Was the theme show some leg and show the most inappropriate image available to demonstrate that this woman can’t possible be fit for office? You’ve got them rolling in the aisles Jon.

There are plenty of people arguing that the shot is not sexist including Tina Brown and others who point out that we have previously seen Bill Clinton and Barrack Obama shirtless and toned. But to argue this is the same is churlish. Showing powerful men looking athletic is one thing. Yes they have sex appeal, but it does not detract from their ability to run the country. Quite the opposite. The Palin cover shoot is another matter entirely and is part of a long tradition of demeaning women by using revealing shots to undermine them.

Palin might not be fit for office, but she has a lot of support and it is growing with this latest publicity blitz and her appearance on Oprah. On Facebook she has a million plus fans where she writes: “The Runner’s World magazine one-page profile for which this photo was taken was all about health and fitness – a subject to which I am devoted and which is critically important to this nation. The out-of-context Newsweek approach is sexist and oh-so-expected by now. If anyone can learn anything from it: it shows why you shouldn’t judge a book by its cover, gender, or colour of skin.”

There is the question why she was doing revealing shots like this in the first place (even for Runners World), but this question has fallen by the wayside as the blowback from this story does her more good than the harm than the “liberal” media mag intended.

Interestingly, I think there are certain parallels with Gordon Brown in the UK last week. Where the rightwing douche bags at the Sun bullied and belittled Brown. Only to have it blowback in their faces.

Newsweek is engaged in similar tactics, but as Taylor Marsh writes on the Huffington Post the difference is that Palin’s people don’t care.

“Oh, and by the way, for all you fact checking fanatics, the people behind Sarah don’t care, aren’t listening, don’t trust the criticism. Norah O’Donnell was in Michigan, another battleground state on Sarah Palin’s Going Rogue tour, to see first hand the evidence. Here’s a very rough transcript of part of what she said today on MSNBC: ‘This is a line that stretches all the way back… another 1,000 people to see Sarah… It’s 9:00 o’clock in the morning and she’s not here until 6:00 pm tonight…. […] You know what it is? It’s a connection. … Palin says she’s treated unfairly, treated unfairly by the media, by Newsweek magazine …and the people in middle America feel treated.. unfairly’.”

Taylor adds that this is dangerous stuff. People will get outraged and almost inevitably that outrage will go somewhere.

Gene adds: All is not well in Palinland.