What is it with Quakers and Jihadism?

All bloody principles and practices we do utterly deny, with all outward wars, and strife, and fightings with outward weapons, for any end, or under any pretence whatsoever, and this is our testimony to the whole world. That spirit of Christ by which we are guided is not changeable, so as once to command us from a thing as evil and again to move unto it; and we do certainly know, and so testify to the world, that the spirit of Christ, which leads us into all Truth, will never move us to fight any war against any man with outward weapons, neither for the kingdom of Christ, nor for the kingdoms of this world.

The fierce struggle between the Islamic thoughts and the Kufr thoughts, and between the Muslims and the Kuffar, has been intense ever since the dawn of Islam. When the Messenger of Allah (saw) was sent, the struggle was only an intellectual one, and was not associated with any material struggle. This status quo continued until the Islamic State was established in Madinah, whereupon the army and the authority were established and since then, the Messenger of Allah (saw) combined the material struggle with the intellectual struggle. The verses of Jihad were revealed and the struggle went on. It will continue in this way – a bloody struggle alongside the intellectual struggle – until the Hour comes and Allah (swt) inherits the Earth and those on it. This is why Kufr is an enemy of Islam, and this is why the Kuffar will be the enemies of the Muslims as long as there is Islam and Kufr in this world, Muslims and Kuffar, until all are resurrected […] and it should be taken as a criterion to judge the relationships between Islam and Kufr and between the Muslims and the Kuffar 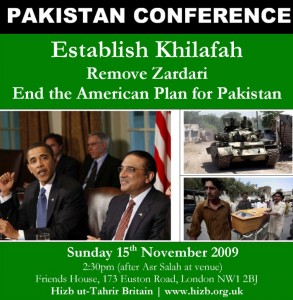 This is from the Friends House lettings policy (pdf):

A booking may be refused if:
• The aims and policies of the organisation or individual are in serious conflict with Quaker beliefs. Written details of the aims or policies of new groups wishing to hold meetings in Friends house are normally requested
• Violence or the encouragement of violence at a meeting may reasonably be anticipated.

How Friends House squares that circle in the case of Hizb is anyone’s guess.

A scene from a Hizb rally in London: