Congratulations to Neil Gerrard MP, who according to the anti-BNP campaign group Nothing British About The BNP, has pulled out of a pro-Hamas rally organised by the Palestine Return Centre.

Nothing British has learnt from Neil Gerrard’s office that he will not be attending the Palestinian Return Centre’s December rally.

NB was told that Mr Gerrard decided to reject the PRC’s invitation on the basis of the substantial evidence that shows how Kristina Morvai was invited to the pro-Hamas conference in London on December 16th.

Last week, Jenny Tonge informed the Jewish Chronicle that she still intends to go to rally because she believes:  Ms Morvai is not attending the conference. I understand the invitation was never issued formally.

We continue to urge Lady Tonge to reject this invitation and for the PRC to come clean over Ms Morvai’s invite to its event.

Kristina Morvai was elected to the European Parliament on the Jobbik list. Jobbik is an neo Nazi party, and Morvai is a close ally of the BNP’s Nick Griffin:

A new pan-European party calling itself the Alliance of European National Movements, an alliance of neo-fascist political parties, will be launched in the European parliament this Thursday.

The alliance headed by Griffin’s BNP, Morvai’s Jobbik and Le Pen’s Front National was unable to muster the minimum membership of seven member states which is required to form a pan-European party under EU funding rules. 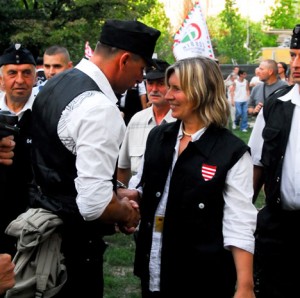 The Palestine Return Centre employs the Muslim Council of Britain’s Daud Abdullah, who signed the Istanbul Declaration which implicitly threatened Britain’s Royal Navy with terrorist attacks, following the Prime Minister’s offer of assistance in enforcing the ceasefire in Gaza.

Baroness Tonge’s reason for participating in the PRC’s event – “I understand the invitation was never issued formally” – is, quite frankly, crap. The PRC itself issued a press release for the event on which both Baroness Tonge and Kristina Morvai’s name appeared as speakers. Nothing British have spoken to Kristina Morvai’s office and – as far as she is concerned – she received an invitation and is attending.

I have to say, and I know this will be enormously unpopular for many readers of the Jewish Chronicle, but the sad thing is that Jenny Tonge says many other things that are worth listening to and are completely obscured by what has become polemicised. It does a disservice to her.

OK Nick. I understand that it might not be a problem for one of the Lib Dem’s most prominent peers to speak on a pro-Hamas platform.

However, at the very least, she’ll be speaking to an organisation which solicits the support of Europe’s worst neo Nazis.