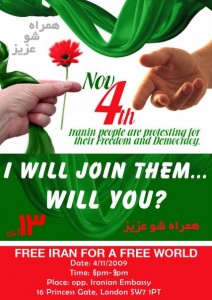 I will join them.

Even though they can’t spell “Iranian”!

Hope to see you there.

Gene adds: Robin Wright of Time reports on the significance of November 4– the 30th anniversary of the siege of the US embassy in Tehran– for the Iranian regime and the opposition:

Last year students paraded down the streets shouting anti-American slogans and burning an effigy of President George W. Bush. Now, for many Iranian students, the real issue is no longer the U.S. This year opposition leaders are calling on Iranians young and old to parade in front of the graffiti-covered embassy walls against their controversial President, Mahmoud Ahmadinejad, and Supreme Leader Ayatullah Ali Khamenei.
…..
Many involved in the embassy siege later became leaders of the reform movement. [Ibrahim] Asgharzadeh went on to become a member of Tehran’s city council. Mohsen Mirdamadi, another of the three masterminds, became a member of parliament and leader of Iran’s largest reform party. As chairman of Iran’s foreign affairs committee, he called for improving relations with the U.S. And as Iran prepares to commemorate the event that he helped plan, Mirdamadi today is among the more than 100 political prisoners who are awaiting the outcome of a mass show trial on charges of trying to subvert the revolution.

Iran has erupted in protest.

The Guardian has a good liveblog of what is happening. 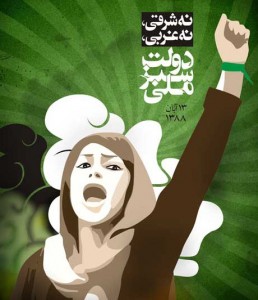 “On Tusday the Revolutionary Guards visited schools to hand out green headbands bearing slogans in support of Ayatollah Ali Khamenei, the Supreme Leader. In some schools the pupils refused to take them.”

We have heard for thirty years what the Iranian government is against; the question, now, is what kind of future it is for. The American people have great respect for the people of Iran and their rich history. The world continues to bear witness to their powerful calls for justice, and their courageous pursuit of universal rights. It is time for the Iranian government to decide whether it wants to focus on the past, or whether it will make the choices that will open the door to greater opportunity, prosperity, and justice for its people.