In Hungary open and aggressive racism is rampant.

One of the worst antisemitic and racist rags is the Budapest weekly Magyar Demokrata: favoured by Viktor Orbán the chief of the  conservative Fidesz opposition party.

The editor in chief of this far-right weekly is András Bencsik, sponsor of the infamous Hungarian Guard. He started his career working for Népszabadság the official daily of the communist party during the Kádár Period responsible for party news. It would take too long to explain how a dedicated communist like Bencsik became editor-in-chief of Magyar Demokrata (MD) and a Hungarian Guard activist.

Orbán asked often his followers to support Bencsik’s rag in spite of its obnoxious character.

One of the authors of MD is Ádám Pozsonyi, who two weeks ago published a call to the readers to steal books and to destroy them.

Ádám Pozsonyi argues openly that the Hungarian “intellectual life is under foreign direction” and that “our political and intellectual elite is foreign”. His conclusion is that his readers should act as follows:

“Let’s form commando groups of 3-4 persons and comb the libraries and let’s steal and then destroy the tasteless and cancerous centre of the left liberal traitors to our Homeland. If it is not possible to smuggle them out, we should tear or scrawl all over the pages.”

The unsuccessful scribbler Ádám Pozsonyi is also  full of envy against those Hungarian writers who are recognised and translated into other languages. His venom, in particular, is reserved for three “traitors to the homeland” who are all Jewish:

“Spiró is a scab, Konrád I curse, and Nádas makes me want to puke”

How bad are things in Hungary now?

Here’s a picture that I’ve just been sent. It shows a Hungarian racist and admirer of Hamas whose  T Shirt makes it clear what he is hoping for. 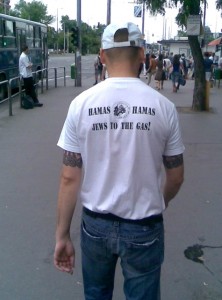